As with the last time the question was asked, David Cameron leads Mr Corbyn by a 2-1 margin when asked who would be the best prime minister. 41% of all voters choose Mr Cameron vs. just 22% selecting Mr Corbyn.As with Ed Miliband before May’s general election, David Cameron is supported by the overwhelming majority of Conservative voters (93%) while support for the Labour leader is much more hesitant (55%). 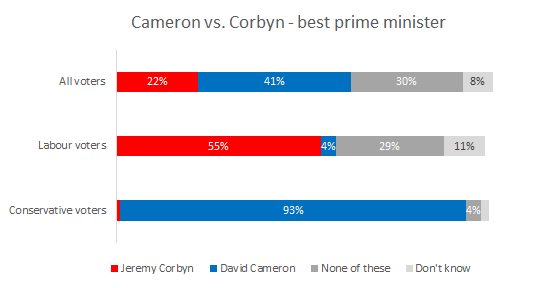 However, with Mr Cameron having stated his intention to stand down before the next general election, the more interesting figures are how each of his potential successors compare against the Labour leader.Boris Johnson has an 11 point lead over Mr Corbyn (35% to 24%) but Home Secretary Theresa May and Chancellor George Osborne are effectively tied with the Labour leader.Opinium Research carried out an online survey of 1,934 GB adults from 13th to 16th October 2015. Results have been weighted to nationally representative criteria.