In the wake of the on-going situation in Calais and reports of British traffickers profiteering from the crisis, Opinium surveyed a nationally representative sample of the UK public to understand their perceptions on the issue. The following statistics are based on 95% of our sample who stated they were aware of the crisis in Calais.

Over 40% believe that both the UK and France hold equal responsibility for resolving the migrant crisis ? with fewer than one in five stating that France alone holds responsibility. Looking at our results by Party support, we can see that there is a marked divide in opinion between the Conservatives and UKIP on the one hand, and Labour, the SNP and the Greens on the other. 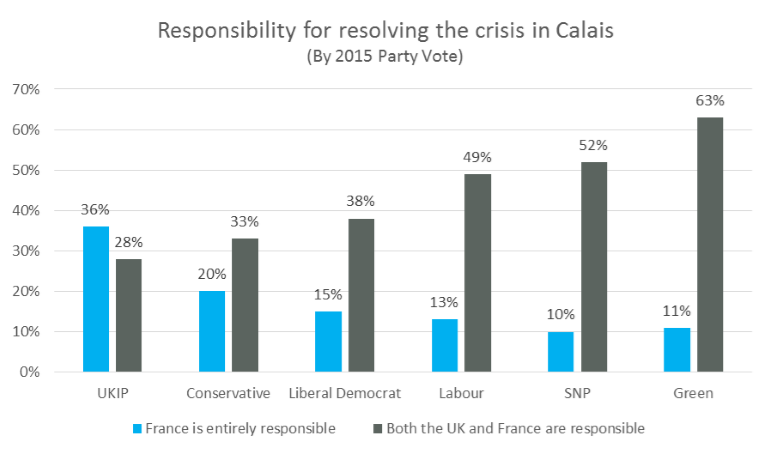 Despite the evident agreement among the British public that the UK has a part to play in resolving the crisis, a majority have little or no confidence in the Prime Minister to resolve the crisis. Of these, almost a third (30%) stated that they have ?no confidence at all? in David Cameron?s ability to resolve the crisis. While the Prime Minister fares better than his counterpart FranÁois Hollande, our results seem to suggest a distinct lack of confidence in key political actors to take appropriate action on this issue.

The lack of confidence in politicians was further supported by our finding that nearly 70% of UK adults disagree with the policy of fining lorry drivers if migrants are found inside their vehicles.

40% of UK adults believe that it is unfair to punish lorry drivers in this way, while 28% believe that it will not prevent illegal immigrants from trying to enter the UK. Even among the minority of people who approve of the policy, only 12% believe it will prevent the transportation of illegal immigrants. Whether the public approves or disapproves of the policy, it seems as though the vast majority do not regard it as an effective solution to the Calais crisis.

Nearly 80% of UK adults believe that the UK has no space to accept more migrants, with 70% agreeing that immigration is putting our national identity at risk.

A clear majority of UK adults believe that immigration is in danger of having a detrimental effect. Over half of our sample (56%) strongly believe that the UK has run out of space to house more migrants and 76% believe that the Government is too soft on refugees and migrants entering the UK. Our findings suggest that public patience with the UK?s track-record towards migrants is running out ? with 60% of UK adults disagreeing with the idea that the UK has a moral obligation to take in refugees and migrants and 76% believing that the UK actually does more than most countries.

Interestingly, those respondents who were approaching voting age at the time of the last European Referendum in 1975 are the most likely to disagree that the UK has a moral obligation to take in migrants. When we look at our responses by Party support we again see a significant divide between the left and right ? with 66% of Conservative voters disagree with this statement compared to 45% of Labour voters. It seems that understanding these divergent groups will be crucial in the run-up to the referendum on Europe next year. In particular, it will be interesting to see the part that pre-European generations play in the debate on whether to stay or leave the Union.