We recently asked 2,000 UK adults about their alcohol consumption over the past month, and we found that the most favoured spirits were vodka and whisky ? 28% and 25% respectively had drunk these in the past month.

Seven in ten (72%) have had an alcoholic beverage the past month.

Substantial gender differences in alcohol consumption appeared in the results, with men having drunk noticeably more than women. 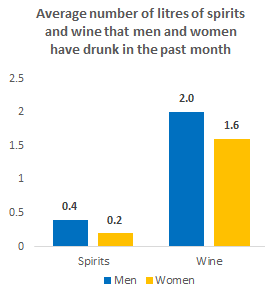 In the last month, UK men drunk 2 litres of wine and 0.4 litres of spirits. By comparison, women drunk less wine (1.6 litres) and half the amount of spirits (0.2 litres). This works out on average for UK adults as over a third of a bottle of spirits and almost 2 and half bottles of wine a month.

The most hard drinking age group appeared to be the 25 to 34 year olds, consuming on average most of a bottle of spirits (0.7 litres) and three bottles of wine (2.3 litres) a month.

Although wine intake was higher among this group, the largest contrast was with spirits. 62% of all spirits consumed in the past month was among those aged 25 to 34.

Opinium Research carried out an online survey of 2,003 UK adults aged 18+ from 16th to 19th September 2014. Results have been weighted to nationally representative criteria.