This stark figure is cause for concern as loneliness can be associated with neglecting vital relationships that sustains physical and mental health. Among those who say they feel alone, nearly three quarters (70 per cent) feel sad, over half (52 per cent) feel isolated, one third (34 per cent) are worried or anxious, and one in five (18 per cent) feel embarrassed. On top of this, one in five (19 per cent) Brits don?t think anybody knows how lonely they feel, adding to the isolation and difference brought about by this.

The report also reveals that the most lonely people in Britain are those aged under 30 (23 per cent compared to national average of 15 per cent), or those living in areas with a dense population such as inner cities (24 per cent) compared to villages (13 per cent) ? this is particularly true in London where 18 per cent described themselves as lonely.

Dr Andrew McCulloch, Chief Executive of the Mental Health Foundation said:
?While loneliness is a natural emotion that everybody feels, chronic loneliness can lead to mental health problems. People who find themselves feeling lonely should not have to feel uncomfortable talking about it or asking for help. It?s essential to raise awareness of the issue to tackle the stigma attached to loneliness so that people feel more comfortable connecting with each other.”

However, it is not all doom and gloom as there are benefits to spending time alone. Two in five (61 per cent) said that it gives them the opportunity to do things they like to do, as well as half (48 per cent) saying it allows them space to think.

On the other side, spending time alone can be difficult as one quarter (23 per cent) said they miss talking to people, one fifth (18 per cent) like to share their experiences, and 17 per cent get bored of their own company quite quickly. However, over two fifths (43%) don?t dislike anything about being alone, but this varies widely with age ? falling to 19 per cent among those under 30, and rising to half of respondents (50 per cent) aged 70 or over.

James Endersby, managing director of Opinium Research said: ?Our report highlights that it?s easy to be lonely in a crowd and ?Facebook Friends? may be no substitute for real friends when it comes to alleviating loneliness. It could also be that many people these days are not comfortable being by themselves. It?s always important to take time out to think, but just make sure it?s not too much as there?s nothing better than sharing experiences with people around you.?

Other interesting statistics from the report 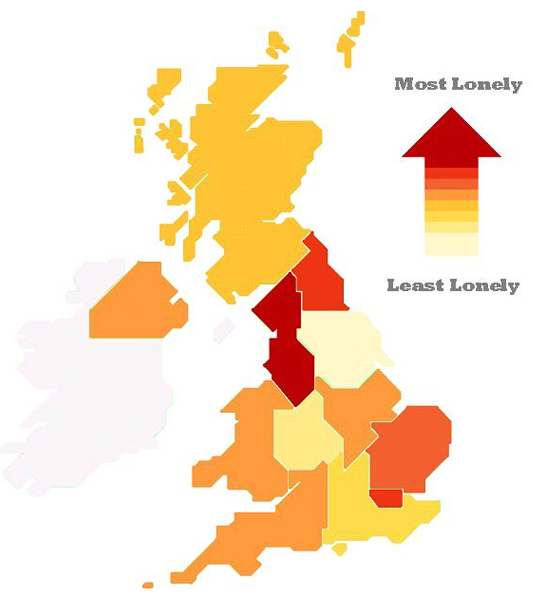 Opinium Research carried out an online survey of 2,032 UK adults aged 18+ from 6th to 9th May 2011. Results have been weighted to nationally representative criteria.