The last Opinium Observer poll of January has caused a bit of a stir with a shift from a 3 point Labour lead in the middle of the month to a 7 point Tory lead at the end. 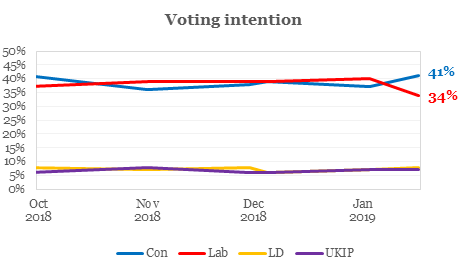 Normally we?d be sceptical of such a large shift and, as always, it?s best to take an overall look at what all polls are showing over time to get an accurate picture of how public opinion is changing.

However, in this instance we do have some evidence that this change in opinion is real rather than the result of sample variation or other statistical noise.

At the moment Opinium runs a voting intention poll for the Observer once a fortnight. Usually this is once a month but, with the political situation being what it is, it feels necessary to run more often. As well as this though, we attach the usual voting intention questions to many other surveys we run for private clients so that we can look at what Conservative, Labour, Leave or Remain voters think about whatever we?re asking questions about.

In this case, the poll we ran for the Peoples? Vote campaign from 23rd to 25th January also ran these questions and came out with a 4 point Conservative lead (40% to 36% for Labour, Lib Dems and UKIP largely unchanged).

Here?s how the same chart from above looks with this additional data point added in: 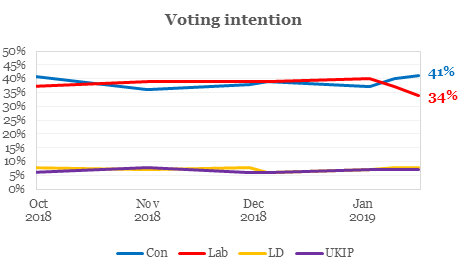 Can you spot the difference? If anything, this shows that the uplift in the Conservative vote share actually occurred slightly earlier than a smooth trendline would suggest while the decline in Labour?s share is constant.

Other figures show consistency between the three polls. Theresa May and Jeremy Corbyn?s handling of Brexit show a slight improvement and decline respectively, albeit statistically insignificant. The two leaders? overall approval is also in line with a narrow shift against Corbyn, as is Theresa May?s lead on the two-way ?best prime minister? question.

So while a 10 point swing in a fortnight is quite a large change, the fact that it is backed up by more than one poll suggests that a move away from Labour is real.

Of course, the uplift in the Conservative vote share is in part down to the veneer of unity that the Brady amendment and some positive headlines created. It remains to be seen whether this lead will survive the next inevitable collision between Brexit strategy and reality.