On first preferences, the Labour standard bearer has strengthened his lead, with 35% vs. 27% for Conservative Zac Goldsmith and 9% for other candidates. 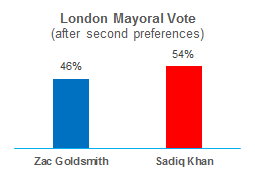 However, this improvement is offset by a stronger performance by Mr Goldsmith once 2nd preference votes of supporters of other candidates are reallocated, giving a final round result of 54% for Khan vs. 46% for Goldsmith.Central London and the suburbs divergeUnder the surface it appears that there are divergent movements in opinion going on in different parts of the capital. In March, Sadiq Khan had a clear lead in Inner London (60% vs. 40% for Zac Goldsmith), while the two were evenly pitted against each other in Outer London.In our latest poll for the Evening Standard it appears that Mr Khan’s lead has increased in Inner London, rising to 70% of the vote after second preferences have been taken into account, while movement to the Conservatives in the suburbs gives Mr Goldsmith a reasonable lead in Outer London.Opinium Research carried out an online survey of 1,015 London adults aged 18+ from 30th March to 3rd April 2016. Results have been weighted to representative criteria to fit the profile of all London adults.