New research carried out by Opinium has shown that the nation’s favourite World Cup song is Three Lions by Baddiel, Skinner & the Lightning Seeds.

After asking 1105 football fans to choose their favourite World Cup (or other major tournament) anthems the 1996 classic was chosen by just under half (47%) of footy fans.

This was followed by Fat Les? Vindaloo and New Order’s World in Motion tied with 19% in second place.

The poll was also notable for interesting age differences. The 1966 World Cup Squad?s ?Back Home? was chosen by 29% of those over 55 whereas it polled only 5% among those under 35.

However, far more interesting is that fact one in five (21%) of Scottish football fans voted for Three Lions? clearly great songs can transcend national animosity.

Fans of the cult classic Meat Pie Sausage Roll will be disappointed to hear that only 2% of football fans picked it as a favourite. 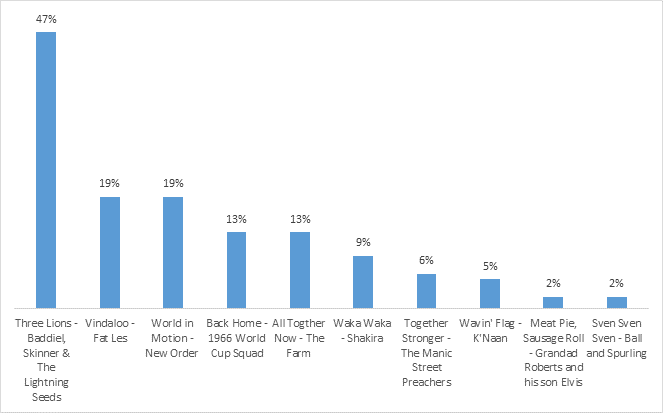