Is HS2 going off the rails?

Is HS2 going off the rails?

Previous and present Government policy regarding improving London?s rail infrastructure seems to have support amongst those who have an opinion either way. Over a third (36%) support Crossrail, while 10% oppose it, with similar numbers for and against Crossrail 2. 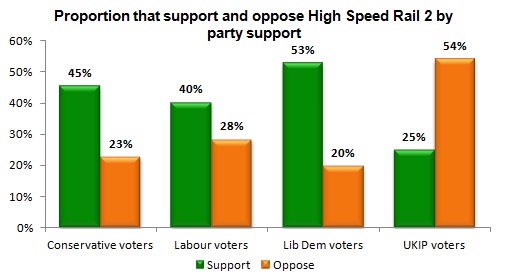 Unsurprisingly, High Speed Rail 2 (HS2) is the most controversial policy with 36% supporting and 30% opposed. Although, interestingly, there are clear leads amongst the three major parties for supporting HS2 with only UKIP voters noticeably in opposition to the scheme. In contrast, 44% support a high speed line just linking the northern cities, while two thirds (64%) support just improving existing rail links between northern cities.

The options for HS2

Despite support, some clearly feel that the HS2 scheme could be handled better. For example, many clearly see little reason for the two stage building of the rail link, with 43% saying the whole line should be built at once rather than the current construction programme (11%).

This can be partially explained when we find that more believe the first phase of HS2 will benefit London (31%) than Birmingham (17%). On the other hand, voters are more likely to believe that ?the provinces? will get a better deal from the second phase with 26% believing the north will benefit most from it, and only 23% believing London will get the most benefit.

Opinium Research carried out an online survey of 1,971 GB adults aged 18+ from 11th to 12th March 2014. Results have been weighted to nationally representative criteria.