#indyref: a post-mortem from Opinium

#indyref: a post-mortem from Opinium

Opinium had two late entries into the Scotland referendum polling contest: here (for the Observer on Sunday 14th September) and here (for the Telegraph on Wednesday 17th September), and so our final and official prediction was 52% for NO and 48% for YES (excluding undecideds). Or 49% NO; 45% YES and at that stage (the weekend before), 6% were UNDECIDED.

But looking at our 52% for NO and 48% for YES prediction (excluding the undecideds at that stage), and taking the margin of error into account (+3% or -3%), we nailed it, and so did many of our competitors, however we do pride ourselves on being one of the most accurate research agencies, so it’s only the one bottle of Prosecco for breakfast today! 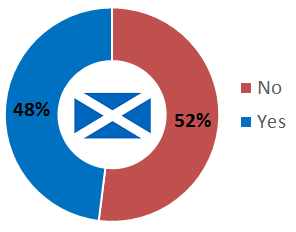 But we didn’t get it spot on did we? Let’s look at some potential reasons why.

The main thing (excuse) to point out is that referendums are a completely different beast compared to the general elections that pollsters? methods are usually geared to measure. Don’t get us wrong, we love a good #referendum, but they are incredibly challenging to predict.

General elections happen every few years and, while each brings its own challenges, there are still multiple data points on a continuous scale so it is still possible to divine rules or trends and apply these to future elections. If you get it wrong one year, you can see how you got it wrong and adjust things for next time.

Referendums are completely unique events. Turnout can range from extremely low (the 2011 Alternative Vote referendum) to extremely high (the 2014 Scottish referendum) and in both cases pollsters are taking lessons from other elections and making a judgement about which apply, or do not apply, to this referendum.

We think that in this case our polls have captured the ”energy” and ”enthusiasm” of the Yes campaign and allowed that to overstate the share of the vote that Yes would receive.

Our thinking at present during our early post-mortem (8am on the morning after), is that there was either a late swing to No among the 6% of our undecideds, some softer Yes voters not turning out in the numbers we thought they would or a heap of ?shy No? voters who were just not prepared to say which way they’d go until the last minute.

Any which way – we’ve had a blast!