Pundits have extensively covered how difficult Brexit is for Labour. The current leadership has been opposed to the European Union as long as the UK has been a member, while the majority of the parliamentary party has remained deeply unhappy at the prospect of leaving the EU.

Fortunately for Labour, the damage from this fissure in the party has been limited due to their constructive ambiguity on the topic. But this was merely an enabler for what we saw during the campaign where the Conservatives allowed themselves to be painted as the Brexit party amongst Remainers, giving non-committed voters cause to drift to Labour regardless of any division in party?s ranks. The challenge for the party is to grow beyond ?the 48%?, and set out a positive vision that will win over those who would reject the Conservatives if Brexit was secure in Labour?s hands.

Intriguingly, both Remain voters and Leave voters went into the general election thinking Labour was going to act against their referendum vote. Just under half (46%) of Leavers thought a Labour victory would have kept the UK in the European Union, while an almost identical proportion of Remain voters (47%) thought Labour would have continued with Brexit regardless had they won the general election.

With both halves of the electorate, at best, lacking optimism around what Labour might do regards Brexit, it?s remarkable that the issue did not do Labour more damage. The Conservative Party has lead the debate on Brexit. At times it might appear that they are the only ones talking about it, but Labour?s ambiguity has allowed those unhappy with the Tory vision to project their hopes onto Labour. In short, Labour?s success is due to how the party is viewed in relation to the Conservatives.

Labour?s good performance in the general election was due to their success in winning over a large proportion of Remain voters regardless of what they thought the party would do in government on Brexit. This was made possible because Remainers came to see the Conservatives as the Brexit party and this is a view that has become deeply engrained.

Over half of Remainers think the Tories are predominantly pro-Brexit and this doesn?t change even if they thought Labour was not going to overturn the June 2016 vote. If you voted Remain you think Labour are either on your side or, at least, are much closer to your point of view than the Brexit-obsessed Tories.

This negative opinion of the Conservative Party might allow Labour to consolidate its base amongst Remainers, but if Labour wants to grow its appeal beyond this group, the biggest space for potential growth is amongst the Leave voters who are persuadable that Labour is also on their side.

Unlike Remainers, who voted for Labour regardless of the party?s perceived position, Leave voters very clearly judged the two parties based on likelihood to carry out Brexit. If you were a Leave voter and you doubted Labour?s resolve to take Britain out of the EU, the party simply didn?t get your vote (only 11% of this group voted Labour). But if you thought Brexit was still safe in Labour?s hands, then Leavers narrowly actually voted for the Jeremy Corbyn?s Labour over the Tories (49% vs 42% respectively).

This sizeable chunk of Leave voters ? those who think Labour would have respected the referendum result ? actually think both major parties are quite balanced on Brexit, and this group were actually prepared to give Labour the benefit of the doubt on Brexit at the general election. 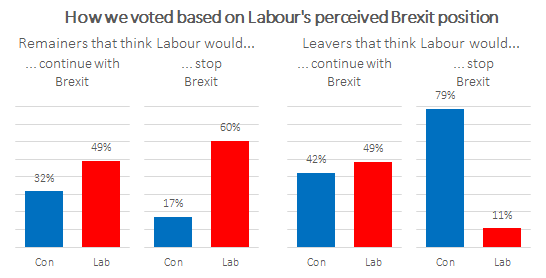 This is the easiest swing group to identify: Leave voters who think both parties would implement Brexit. On one hand Labour can gain more ground here by painting a clearer image of what Brexit could mean under Labour: what they would do if in government, how they would respond to Leave voters? fears. It then opens this audience up to hearing about the other policy areas.

But casting doubt on the process won’t help. Only 12% of this group think there should be a second referendum on the Brexit deal, 77% do not.

Labour does rely on Remain voters, but most have written off the Tories as the Brexit party. The opportunities, and dangers, for Labour are amongst those Brexiteers that could be open to voting for the party if only they removed the question mark over Brexit.

Adam Drummond: Labour?s strategic vagueness worked in 2017 and ?sane Brexit? is their best chance of keeping their options open until we know how things are turning out.