Sport. Is good for you.We all know boys grow up watching images of their gender as confident sporting heroes who are revered for their accomplishments. Boys are expected to play sports and are encouraged to do so by everyone around them. Girls do not necessarily receive the same consistent message. 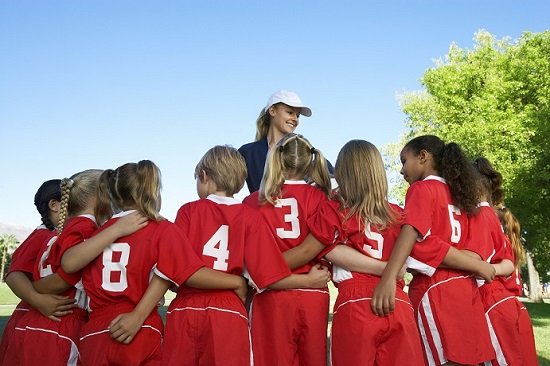 Think Mayweather, Pacquiao, Ronaldo, Messi and Federer as examples of today?s top sportsmen adorning bedroom walls and encouraging boys to turn out. Not only are these sportsmen adored both on the court/field/ring for their near perfect performances every time they step out, but they?re also worshiped widely for the piles of money they rake in because of it. Floyd Mayweather earned $300m between June 1, 2014, and June 1, 2015 and shot straight to the top spot in the Forbes list of highest paid athletes.Here?s the current top ten with their total income for the period, including salary/winnings and endorsements:1. Floyd Mayweather – $300m2. Manny Pacquiao – $160m3. Cristiano Ronaldo – $79.6m4. Lionel Messi – $73.8m5. Roger Federer – $67m6. LeBron James – $64.8m7. Kevin Durant – $54.1m8. Phil Mickelson – $50.8m9. Tiger Woods – $50.6m (despite only winning $600k)10. Kobe Bryant – $49.5mImpressive chaps!Problem?I had to scroll down to #26 to find the first woman, Maria Sharapova ($29.7m) and then Serena Williams ($24.6m) in 47th spot. Only two of the top 100 highest paid sportspeople are women. These two are clearly inspirational role models for women, and men, as of course are those female sports stars who are well known, yet aren?t reflected in these kind of wealth lists.Money isn?t everything, but it?s a damn great barometer of where society places it’s emphasis.*The media plays a huge role in aspiration here.Generally, television coverage of women’s sports is inconsistent at best and non-existent most of the time. While the exposure of female athletes improves during Wimbledon, the Olympic Games and Woman?s World Cup Football, these are only sporadic occurrences. This sends out all the wrong kind of messages to girls. The media certainly helps shape the public’s perceptions of the accomplishments of women playing sports and whether women in general can be strong, confident and highly skilled in the sporting arena.The media shapes the dreams and aspirations of girls.We all know that in general when male athletes receive media attention, such coverage is primarily focused on their skilled performance. When female athletes receive media attention, the media is much more likely to focus on their physical attractiveness or non-sport-related activities. This double standard devalues the athletic achievements of female athletes compared to their male counterparts.*However, there does seem to be an improvement and hope on the horizon.Our recent perceptions research at Opinium shows that the sporting world is perhaps becoming a bit fairer, with improved female sports coverage and awareness of more female sports teams than there were in previous years.Recent coverage of women’s sports has increased interest in women’s sports and respect for the women participating. The media is playing ball?In our study of over 2,000 UK adults, we asked people what they thought about women in sports and female sports in general. Three in four (76%) think that interest in women?s sports has increased discernibly over recent years, with a further three-quarters (77%) saying that this interest is likely to increase even further.Different views by genderInterestingly, nearly half of all the men surveyed (45%) admit that recent coverage of events ? such as the Women?s World Cup ? has changed their perceptions of female sport, including an increased respect for women?s sports and a greater inclination to follow women?s sports. Just as interestingly, a fifth (22%) of women say that media coverage on female sports has actually inspired them to try a new sport themselves.However, despite the increase in interest, the findings also showed a difference between men and women regarding how women should be treated in sport. For example, when thinking about whether women should receive pay and prize money equal to that of their male counterparts, three in four (77%) women say that they should compared to only 53% of men.In general, and aside from all the health benefits, sport is a great way to develop the life long skills of patience, persistence, resilience and confidence in young people. To help tackle the gender inequality more must be done to encourage girls to participate.Television carriage is a critical ingredient for the success of professional women’s sports and competitive professional sport wages, winnings and endorsements. If women’s professional sports cannot tap into big advertising cash, athlete salaries and purses will continue to be depressed and the financial success of women’s sports will be more difficult to achieve. *Final thoughts and confessions:Incidentally, If Mayweather worked on Wall Street, he would have ranked 14th among the top-earning hedge fund managers in 2014.*Thanks to http://www.sportsmanagementresources.com/ for a few of their thoughts on this which I stole from their website ? hopefully they don?t mind me refreshing the cause!