European Football Championships Round Up

European Football Championships Round Up

England expected a quarter final victory, this was shown by the last survey indicating 68% of fans anticipating a win. With dreams shattered, the fans hopes of future glory by means of 2014 World Cup win seem slim.

Looking back on the tournament:

As England fans reflect on their team?s performance, there is promising support shown for the captain Steven Gerrard, 76% approved his captaincy role.

Despite England being knocked out in the quarter finals, the Hodgson effect still seems strong, with an approval rating of 73%.

Fans are now somewhat sceptical of England?s chances in the next world cup in Brazil. Only 1% believes England will lift the world cup and win the tournament. Most fans expect England to be progress no further than the quarter finals.

Confidence in the England side is falling; three quarters of fans think it is unlikely England will win a major national tournament (European Championships or World Cup) in their life time.

Highlights of the tournament

Of the many spectacular goals displayed during the Euros, Mario Balotelli?s exuberance shines through as our survey shows his goal against Germany in the semi-finals is chosen as ?goal of the tournament?.

Andres Iniesta of Spain is titled ?player of the tournament? by 20% of respondents, Iniesta is closely contended by Andrea Pirlo of Italy with 17%. England?s Steven Gerrard only receives 4% of the votes.

Spain won convincingly, hammering Italy with 4-0 defeat. 58% of fans agree that this current Spain team are the best national side of all time. 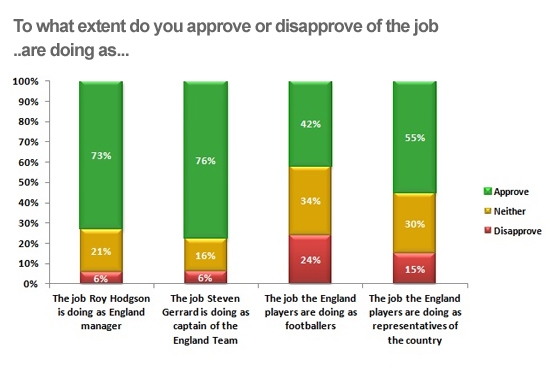 Opinium Research interviewed 1,792 England fans between the 2nd and the 10th of July 2012.