Despite this optimism fans still consider England outsiders to lift the trophy with 46% now backing Germany to win followed by Spain in 2nd (backed by 26%) and England as third favourites with 12% of the backing.

Steven Gerrard comes out as the fans pick for England?s star performer at the Championships to date (backed by 37%) followed by Theo Walcott with 12% and Terry, Hart, Parker and Lescott all earning plaudits.

Asked to pick their team to face the Italians there was strong support for a more adventurous line up with Theo Walcott preferred over James Milner with Danny Welbeck just edging out Andy Carrol in the starting line up.

Despite England benefiting from a Ukranian goal being wrongly disallowed for not crossing the line support for the use of goal line technology amongst fans seems stronger than ever with 94% backing it?s introduction in future matches and only 4% opposing its introduction.

This rise in optimism for England?s chances is largely attributed to the Hodgson effect with approval ratings for the job Hodgson is doing as England manager surging by to 85% net approval compared to 44% ahead of England?s opening match against France.

The fans have also given Steven Gerrard a ringing endorsement as England captain following his recent performances with a net approval rating of 84%. 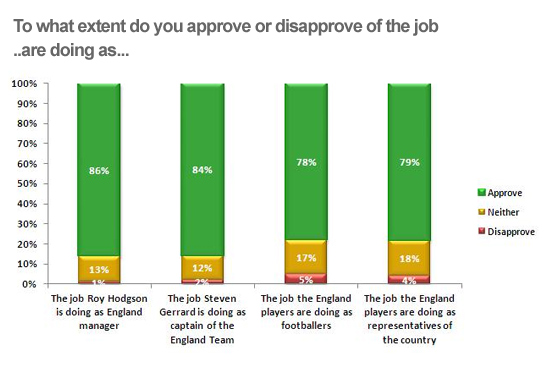