Since then the picture has changed dramatically, as the graph below shows. The number saying the state of the economy is bad has halved to 35%, almost level with the number that say the economy is neither in a good or bad state (34%). 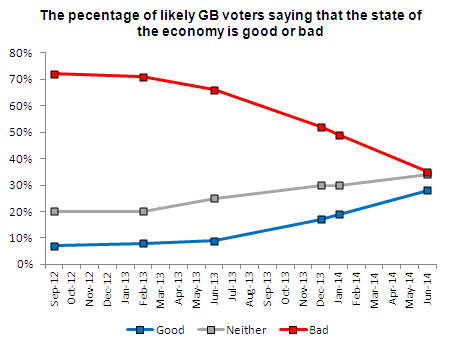 Just as strikingly, the number saying that the economy is in a good state has risen from 7% in September 2012 to just under three in ten (28%).

It is apparent that most of the pick up appears to have been in the past year, when the numbers stating that the economy was good started noticeably increasing. A considerably amount of the increase can be put down to improved figures among Tory voters – the number of Conservatives saying the state of the economy is good has risen from 14% in September 2012 to 62% this month.

Indeed, in 2012 the economy still seemed to be struggling, contracting in the second quarter. It has only been in the past 18 months that growth has started to appear stronger and more consistent.

Opinium Research carried out an online survey of 1,702 likely voters. Results have been weighted to nationally representative criteria. The research was conducted from 3rd to 5th June 2014.