However, numerous other possible dangers to women expecting did not induce similar levels of concern. 44% said they would be concerned if they saw a pregnant woman jogging, followed by smaller numbers for cycling (35%), travelling on a crowded bus or train (32%) and drinking coffee (23%). Interestingly, there was little difference between the responses of woman who have been pregnant and the average. 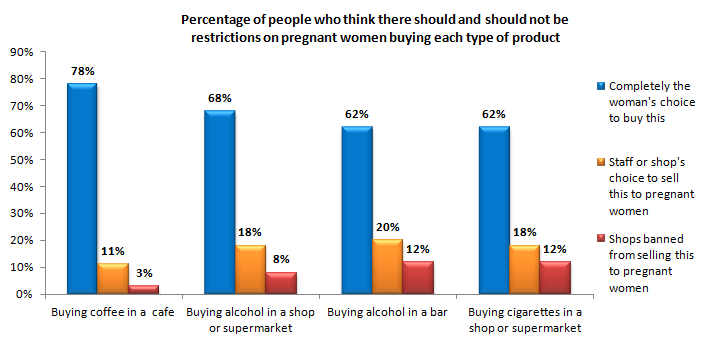 Although alcohol and cigarettes may send the alarm bells ringing, it doesn?t automatically mean that the public think it?s their place to interfere. Taking the above reported situation, over six in ten (62%) think pregnant women should be able to buy alcohol in a bar without any hindrance. Only 12% think bars should be prevented from offering this to soon-to-be mothers, while 19% think the bar or staff member should have the discretion to serve or not. 62% also thought pregnant women should be allowed to buy cigarettes as they wish.

Opinium Research carried out an online survey of 2,001 UK adults. Results have been weighted to nationally representative criteria. The research was conducted from 11th to 14th October 2013.

Jogging: The advice from the babycentre.co.uk is that jogging should be safe during pregnancy as long as you don?t overdo things. There is a worry from falling, especially onto your tummy which you must never do while pregnant.
Cycling: Along with horse riding and other activities, cycling is a danger due to risk of falling ? in particular onto the tummy.
Coffee: Regarding coffee, caffeine intake of more than 200mg a day is the particular issue, possibly raising the likelihood of miscarriage and low birth weight, according to dietician Sarah Shenker on babycentre.co.uk. Caffeine can also come from coke, tea, energy drinks and chocolate.
Commuting: Obviously stressful and tiring, which is never ideal, many women commute while pregnant. Other than increased stress levels, which are not good for the baby, there may not be too many direct threats from the commute itself.

Opinium does not claim to offer professional medical advice and the above notes are from third party sources. We cannot verify the accuracy of the advice from these third parties.