What we found is that attitudes towards immigration vary significantly from region to region. Both London and Scotland demonstrate significantly lower levels of concern over immigration than other parts of the UK ? indeed, these are the only two regions in the UK where the majority of adults are less likely to agree that the UK is running out of space.

We asked ourselves why these two regions might demonstrate different attitudes on immigration to the rest of the UK. What sets them apart? 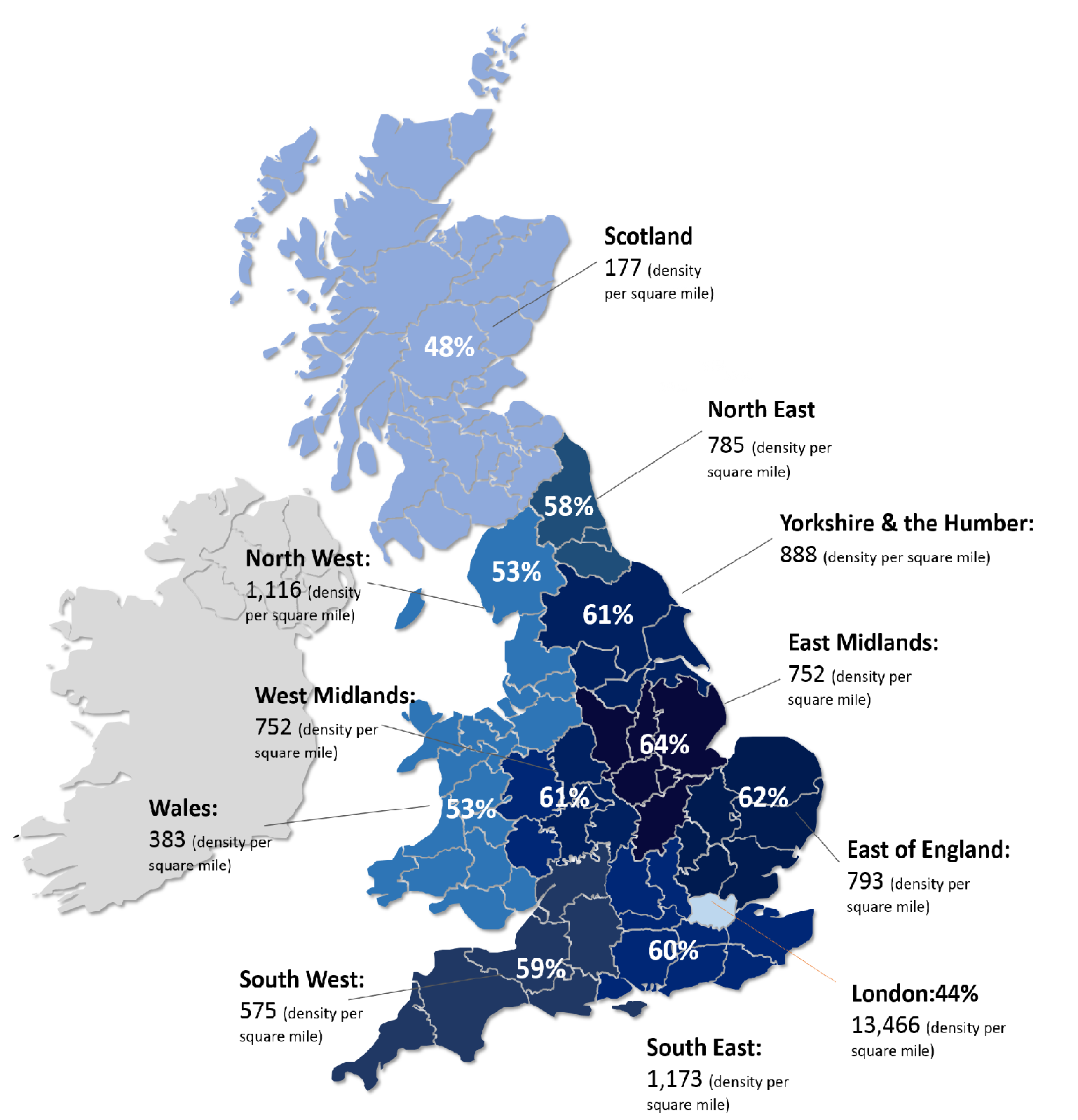 %’s demonstrate level of agreement with the statement: ?The UK does not have enough space to accept more migrants?. Density per mile is based on http://www.ons.gov.uk/ons/rel/pop-estimate/population-estimates-for-uk–… from ONS.

While it might be tempting to hypothesise that higher density of migrant populations over time leads inexorably to increased multiculturalism and tolerance, there are a multitude of historical and present day examples to cast a heavy shadow over this notion. We know that both Scotland and London lean more towards the left than other parts of the UK ? and that this may be at the heart of more lenient attitudes towards migration. But if this were the case, we might expect to see the same leniency in other left-leaning regions, such as the North East.

Perhaps the answer is not political or cultural, but economic and social. London is the fastest growing region in the UK, has the highest growth in employment of any region and (arguably) has the most developed infrastructure, healthcare and social care networks in the country. London?s recovery since the financial crisis has outpaced the rest of the UK by more than half. The subsequent impact on the economic lives of Londoners cannot be ignored. But it is the psychological impact of this additional security of income and employment that may explain Londoners? attitudes towards migration. We may surmise that ? unlike in other parts of the UK ? Londoners do not see economic migration as a significant threat to their livelihoods, except where the competition for employment is high ? such as in construction. The level of increased competition introduced through migration is therefore perceived as extremely low and does not produce a reaction against further migration.

Recent ONS data demonstrating regional growth rates since the financial collapse appear to support this hypothesis. The East Midlands, for example, has seen the slowest recovery and also demonstrates the highest level of agreement that the UK is running out of space for further migration. The trend also appears to be true for the South of England. Further findings from our research appear to support the hypothesis that attitudes towards migration are affected more by socio-economic circumstances than actual levels of migration in a given area. Our data demonstrate that those within the C2DE social grades are significantly more likely to agree with the idea that the UK is running out of space when compared to those in the ABC1 grades (68% and 50% respectively). Standard of living, security of employment and the availability of opportunities would seem to be stronger predictors of social attitudes towards immigration than regional demography.

So, what lessons can policy-makers and politicians draw from our findings? The first is that the source of polarisation in the immigration debate is not a clash of cultures. In fact, 66% of UK adults say that they are proud to live in a multicultural society ? and our data shows no correlation between this sense of pride and attitudes towards immigration policy. Instead, the source of polarisation here is the same as in many other areas of public policy. Economic opportunities, employment, standard of living and personal security are key drivers of attitudes towards immigration.

With party conference season on the horizon, a Labour leadership in contention and political strategists undoubtedly focused on the EU referendum in 2017, we would do well to recognise the economic and social dimensions of the immigration debate. In particular, as the question of whether the UK should leave or remain in the EU will undoubtedly focus on whether there is any economic benefit to our staying.