Although the reputation of the Games may have remained, our research suggests Brits are now less likely to believe the promised benefits have come to fruition.

Appraisal of the Olympics 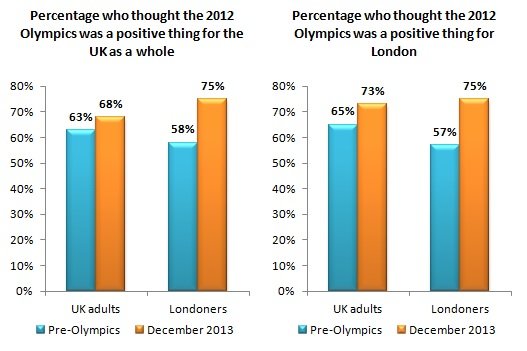 Interestingly, Londoners were more pessimistic than the rest of the UK back in 2012, with only 57% thinking the Games would be good for London, which is has now risen to be higher than the UK average at 75%.

Although a key benefit of the Olympics was meant to be encouraging sport in the UK, the original effect appears to be dwindling. Just after the Olympic Games 18% said the Olympics inspired them to take up either a new sport or one they use to do ? this has now halved to 9% in 2013.

This was supported when we asked UK adults just after the Olympics and recently whether any of the Government?s original Olympic promises were going to be/have been met. Today only 18% think the Games has made the UK a world-leading sporting nation, down from 26% who thought this would be achieved in August 2012.

As can be seen in the table above, the promises that have best held up in the public?s opinion was the aim to transform the East End and to show off the UK as a great place to live and visit. The very positive public reaction to the Games could possibly be why in 2012 45% ? more than any other promise ? thought that the Olympics would inspire a generation of young people. As the euphoria has died down, now only three in ten (30%) believe it has done so.

Cost of the Olympics

After the Olympics finished, we posed to UK adults several statements on the cost of the Games, and asked which single statement best represented their views. As is probably expected, after a successful Games, the respondents? views were best summed up as:

Only 10% summed up their views as the Olympics will not provide any long-term benefits or that the stadium was far too costly considering its probable use after the Games.

Recently, we asked the question slightly differently, seeing whether or not UK adults agree or disagree with each statement, so the results are not directly comparable. However, some differences appear to indicate a greater deal of pessimism regards the cost.

One in four (26%) are prepared to say they think the organisation and presentation of the Rio Games will be worse than London 2012, although a more cautious third (35%) say don?t know or can?t say yet. Either way, just under one in ten Brits (8%) say they will consider travelling to Rio in 2016. This includes a fifth (19%) of the younger generation (18-34s) who will consider going.

Regards Team GB?s performance at Rio ? and despite any misgivings the public may have about cost ? two thirds (66%) believe that the amount of funding given to British Olympians will be the determining factor in the number of medals they win. This message appears to have been heeded, as £264m was awarded by UK Sport to Team GB for London 2012, which will rise to £283.6m for Rio.

Whether or not the public?s faith in higher funding is always justified is another matter. For example, GB?s swimming team was awarded £25.1m for London 2012 (up 22% from 2008), but only won three medals compared to the six they got in Beijing. Similarly, the athletics team?s funding was cut by £1.4m but they still took home six medals instead of the four won in Beijing.

Opinium Research carried out an online survey of 2,006 UK adults. Results have been weighted to nationally representative criteria. The research was conducted from 29th November to 3rd December 2013.

Opinium Research carried out the original research in several surveys before and after the 2012 Olympic Games. Results were weighted to nationally representative criteria.