During the London Underground strike last week, we asked Londoners whether or not they support the industrial action taken by the RMT. The results showed Londoners evenly split, with 38% supporting the strike, and 37% opposed.

A clear gap emerged between the young and old in London. Three in five (61%) of 18 to 34 year olds supported the strike, while a majority (54%) of Londoners aged 55 and above opposed the action taken by the National Union of Rail, Maritime and Transport Workers (RMT). 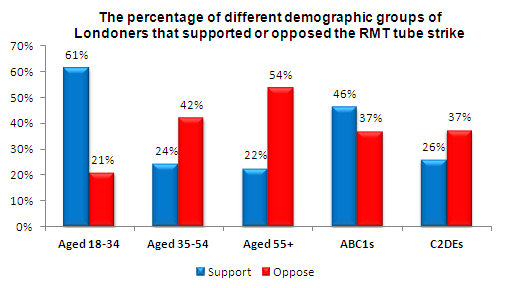 There may also be some truth to the argument that the strike is hitting poorer Londoners the hardest; 46% of ABC1s said they supported the strike, compared to only a quarter (26%) of C2DEs.

The end of the right to strike

Not only do the results show that Londoners are divided, but that their views are firmly entrenched, as two in five (39%) Londoners think that public transport workers should be banned from striking completely.

In addition to an RMT strike, there has also been industrial action from fire fighters in London. Just under half (45%) agreed that the fire service should be banned from striking. This followed a familiar pattern, with a large majority of older Londoners (80%) supporting a strike ban, compared to only a fifth (22%) of 18 to 34 year olds.

Opinium Research carried out an online survey of 2,003 UK adults aged 18+ from 29th April to 2nd May 2014. From this we took a representative sample of 263 Londoners.