We asked voters what they thought the result of the 2015 General Election would be, giving the four most likely outcomes as well as “other outcome” and “don’t know” options.

Counting both “hung parliament with the Conservatives as the largest party” and “Conservative majority” as a victory for David Cameron’s party and the same for Ed Miliband’s party, voters last year expected a Labour victory by 42% to 37%.

As the chart below shows, a year later and the situation is almost reversed. 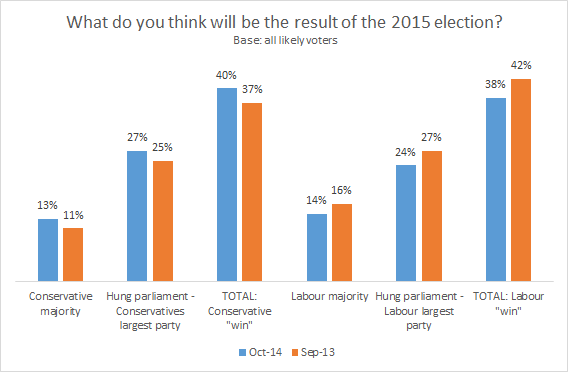 Both sets of questions were asked around party conference season and we will keep asking them in the run up to the election next year.

One thing that hasn’t changed though is that voters think Britain is heading for another hung parliament. The combined total for both “hung parliament” options, regardless of who is the largest party, came to 51% compared to 52% this time last year.