In a turnaround from our previous survey of Labour voters, Andy Burnham has lost the considerable lead he had and fallen behind the rebel backbencher with Shadow Home Secretary Yvette Cooper and Shadow Health Minister Liz Kendall remaining unchanged in 3rd and 4th place respectively.

Opinium surveyed ordinary Labour voters, rather than party members and those who have a vote in the leadership contest, and asked how they would vote if they were able to. In our last survey Mr Corbyn had already climbed to 2nd place but Mr Burnham remained far in front. 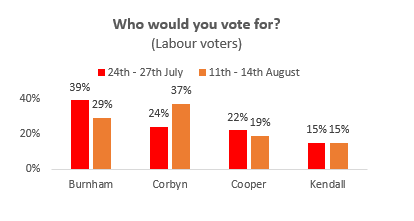 Now Mr Corbyn’s lead among Labour voters reflects, in position if not in scale, his lead among party members, activists and supporters.

Among Labour voters Andy Burnham is still considered the most likely to win a general election but his lead over Mr Corbyn has been dramatically slashed.

In the last survey 70% of Labour voters said Mr Burnham would be likely to win a general election as party leader vs. 51% for Mr Corbyn. The figures now are 66% and 61% respectively.

Opinium Research carried out an online survey of 1,940 GB adults from 11th to 14th August 2015. Results have been weighted to nationally representative criteria. Figures for Labour voters come from the 499 Labour voters contained within that sample.