Copeland is far from a normal seat for us to focus on in a by-election, and we should be careful what we read into it. But, it appears to have offered a good target for the Conservatives to gain a seat at a by-election, even if it they?d have to outperform their current polling figures to nab it.


It is the best part of 300 miles from London to Whitehaven, the largest settlement in the constituency of Copeland. Not only is this seat in one of the least populous and most isolated counties in England. But even within this category Copeland is a peculiar seat. 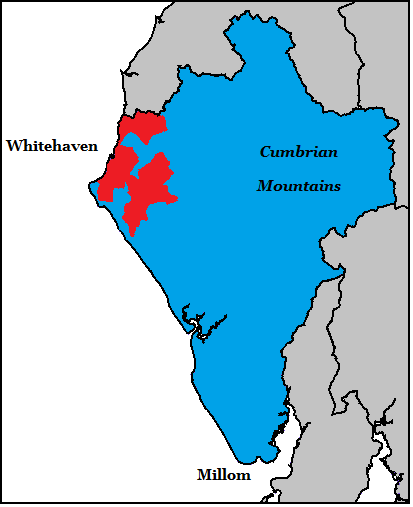 The dependency on Britain?s nuclear submarines has been covered extensively in media analysis. Sellafield is also in the constituency, although currently in the process of being decommissioned. It?s been three decades since the last Cumbrian coal mine closed, but that still adds Copeland to the list of former mining areas in the north. †Whitehaven itself is a port serving shipping from across the Irish Sea.

Fortunately, borough elections were held the same day as the last general election, so we can get a good feel for how Copeland divides politically. Unsurprisingly, the divide is between rural Tory voters and urban Labour voters (see the red and blue on the map to the right).

In the Conservative rural areas, farming and tourism are some of the most important sectors. One in twenty are employed in agriculture and one in eight are employed in hospitality, well above the national averages.

In the Labour-supporting urban areas, the shift is more towards employment in utilities (almost one in ten of the workforce compared to 1% nationally) and manufacturing (a fifth of workers), predominantly in the making of low-tech metal and building products.

Copeland is very white, and old-school blue collar in all its variety of forms. Even the Tory voters here are relatively blue collar, with very few professional jobs in the constituency whatsoever. The ones that do exist are predominantly in lower value industries. This is about as far away as you can get from the commuter belt and banker-land.

Although there are an above average number of retirees in Copeland, the constituency has an exceptionally large number of older workers. Copeland is one of the 40 constituencies with the largest proportion of 45 to 65 year olds. And amongst this group nationally the Conservatives are doing well. 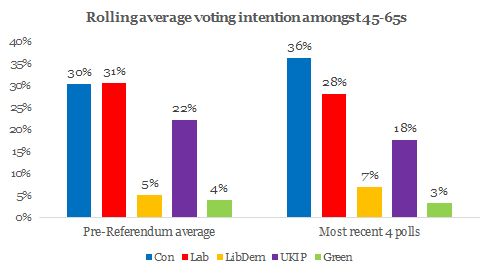 The Tories are now polling 6 points higher amongst this group than immediately before the Referendum, mainly at UKIP?s expense (down 4 points). Labour is down 3 points, although taking the chart at face value it might appear that these switchers are going more to the Lib Dems or Greens than anywhere else.

However, Copeland also†has a particularly high number of older blue collar workers, and†Tory gains are not quite as drastic when we dig down this far. 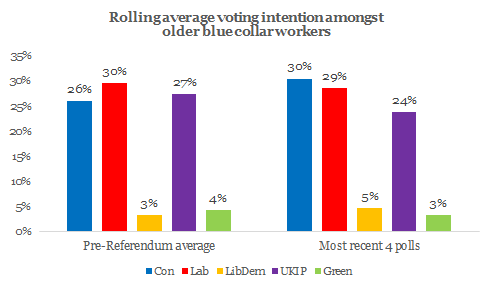 They have gained a few points at UKIP?s expense, but not to the same extent as the 45-65 age group more generally. Labour is also holding its own, for now at least. 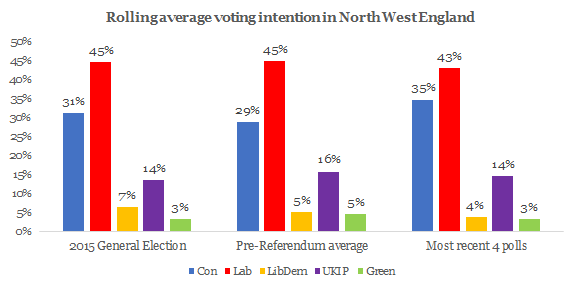 If tonight?s by-election followed the regional polling, Labour would still win, but by less than 1% of the vote. On one hand this means the constituency should be within the party?s reach, but on the other this means the governing party would need to outperform its polling average to nab a seat from the opposition. Very rare.

Only time will tell if Jeremy Corbyn?s leadership of Labour will compare with that of Michael Foot, who lost Mitcham and Morden in 1982 to the Conservatives during the immediate aftermath of the Falklands War. But the exceptional circumstances that led to the last opposition defeat suggests a†victory tonight might be just out of the Tories’ reach.

Post-event analysis:†In an extraordinary turn of events, the Conservatives won and won handsomely. Turnout was pretty good for a by-election, with more than half†of the electorate going to the polls. So it appears the Conservatives did†out perform†their polling nationally, regionally and demographically.†

It appears UKIP voters were very keen to see Labour kicked out, so†switched over to the Tories in large enough numbers to†deliver a bloody nose to Jeremy Corbyn. Although the Conservatives shouldn’t bank on a collapsing UKIP vote everywhere, this certainly†backs up†the government’s current electoral strategy of†rounding up†Leave and soft Remainer voters under the Conservative banner.