The results may not be as positive as some 420 celebrators might have hoped, as six in ten (61%) Brits still think cannabis should be illegal for recreational use. 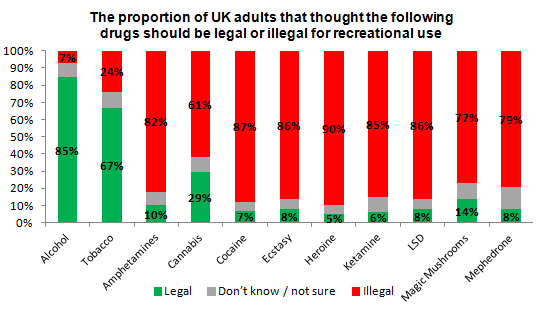 Although cannabis received a more positive response than any of the other currently prohibited drugs listed, still only three in ten (29%) though it should be legalised. As with other substances, more men than women wanted it to be legal (34% to 25%).

Strikingly, over two in five (43%) Londoners wanted marijuana to be de-criminalised.

Still, cannabis seems to have negative connotations with most, with a majority (54%) agreeing that it is a dangerous drug, and half (51%) saying they would be upset if they found out a close family member smoked it.

But then those backing the status quo might also need some answers: eight in ten (79%) Brits agreed that drugs being illegal has failed to stop people using them, while 70% thought cannabis should be legal for medical use in some circumstances.

Opinium Research carried out an online survey of 2,001 UK adults aged 18+ from 11th to 14th April 2014. Results have been weighted to nationally representative criteria.