Brits spend 90% of their time indoors

The average Brit spends 22 hours indoors equating to around 90% of their day.

Despite the lovely summer we?ve had this year nearly half (45%) think the weather often prevents them from spending more time outdoors. Work commitments were also a limiting factor for a fifth of Brits (22%).

Technology developments may be the cause of this, with computer games or going on the PlayStation (43%) cited by parents as the top reason for preventing their children from venturing outside.

Spending this much time indoors is worrying Brits, with over half thinking watching TV (54%) and playing computer games (52%) too much will affect their health.† Social media doesn?t get off lightly either, with 48% thinking that too much time spent scrolling on social hurts their health. When we look at time spent indoors in relation to children, over two-thirds (68%) of parents worry that the amount of time their child spends indoors has an adverse effect on their child?s health. 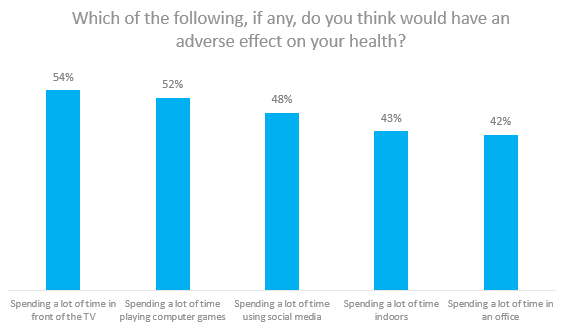 The graph above shows the percentage of Brits worried about the factors listed in relation to their health.