Boris is preferred successor to Cameron

Boris is preferred successor to Cameron 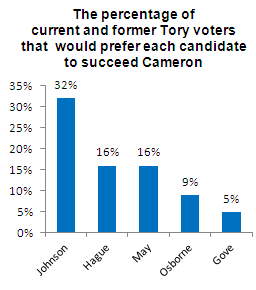 When we asked current and former Conservative voters who they would prefer to see lead the Conservative Party when Cameron steps down, 32% said they would like to see Boris Johnson take over.

This was twice the number of the other nearest contenders – William Hague and Theresa May were both on 16%.

Interestingly, among Conservative voters that had gone over to UKIP, two fifths (39%) chose Boris as preferred successor.

When we had a deeper look into the views of today’s leading Tories, Boris seemed to be performing noticeably better than others on most indicators. 47% of likely voters say they have a favourable impression of Johnson, compared to 37% for Cameron and 28% for Theresa May.

When we investigated the different qualities the current leader and the contenders bring to the table, only Boris Johnson scored higher than Cameron on any characteristics.

The Prime Minister does retain a lead on his traditional strengths. Current and former Tory voters clearly most associated Cameron with “able to show strong leadership” and “able to take tough decisions”. However, Boris had a very clear lead over the incumbent leader on ability to inspire people and ability to attract voters who might not normally support the Conservatives.

Although none of the contenders looked at were seen by a great number as “right wing”, Johnson was seen as most on the right (19%), which was noticeably higher than Theresa May on 9%. The gap between Johnson and the other candidates on this attribute was even more striking among ex-Conservatives that had moved to UKIP.

Opinium Research carried out an online survey of 1,974 GB adults aged 18+ from 26th to 29th August 2014. Results have been weighted to nationally representative criteria.