A successful Autumn Statement but trouble ahead

A successful Autumn Statement but trouble ahead

The Chancellor also has reasons to feel pleased with his performance as our poll showed Mr Osborne and David Cameron holding a steady lead over Ed Miliband and Ed Balls on who voters trust to handle the economy: 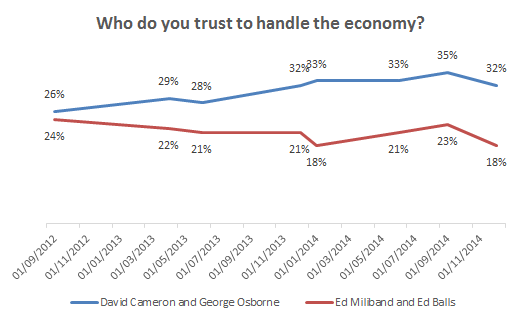 However, while the Conservative lead has expanded to fourteen points, this is actually because both parties have declined but Labour?s top two have declined more than the PM and the Chancellor.

You could put this down to an increasing number of voters for parties other than the top two but the fact that the combined Labour-Conservative vote share is 63%, only four points below that in the 2010 election, implies that we should look for another explanation.

This chart shows whether voters though the current state of the economy, at the time each poll was run, was generally good or bad (very good and quite good have been aggregated, as have very bad and quite bad). Generally the trend is towards improvement from the double-dip years of 2012 with ?good? and ?bad? almost crossing over in September this year.

Unfortunately for the chancellor they never have crossed over. The red line started to rise again this month while the blue one starts to drop again. Combine this with the inevitable fact that voters increasingly place responsibility for the economy on the Coalition rather than the last Labour government and you see Opinium?s patented ?economic blame? index start to rise again as well:

So despite being ahead on handling the economy and David Cameron?s personal approval ratings outstripping his party and those of his principle challenger, the Conservative vs. Labour vote share gap rises and falls with perceptions of the economy. Maybe the PM would be better off not mentioning the warning lights?