Scotland and rUK diverge on Indyref2

Scottish First Minister, Nicola Sturgeon has recently stated that a second Scottish Independence referendum could happen as soon as 2018, citing Britain?s decision to leave the European Union as a “material change” in Scotland’s constitutional circumstances.

Over a third (34%) of British adults agree that a second referendum would be justified as many Scots voted to remain part of Britain to stay within the European Union. These voters maintain that the decision to leave the EU has fundamentally altered their circumstances, justifying Scots being allowed to revisit the issue of independence in another referendum.

Just over half (51%) do not believe that another Scottish Independence referendum is justified, with respondents agreeing that the 2014 referendum was a once in a generation vote that settled the issue for the foreseeable future. Moreover, half of those surveyed agree that there is no need for Scottish independence as Scotland already has its own parliament. 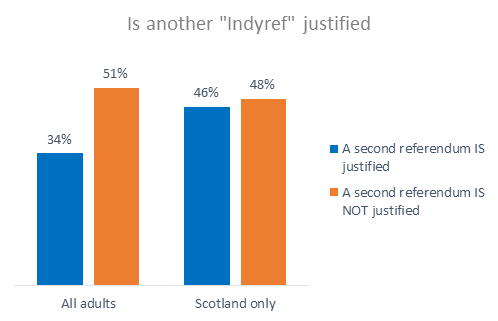 In Scotland the division is much closer with a bare plurality agreeing that a second†referendum is not justified.

Perhaps because of Brexit, two fifths (40%) believe that if Scotland were to hold another vote, the result would be a yes to independence, while 35% predict the same outcome as the 2014 referendum. 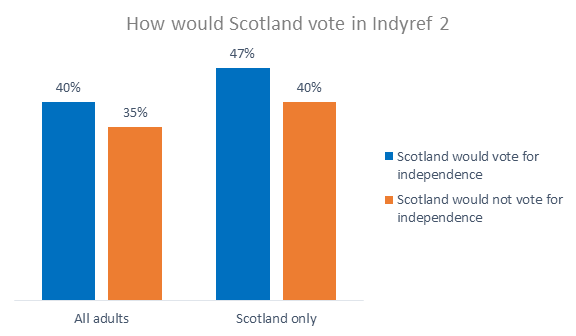 When asked to provide their preferred outcome, nearly three fifths (58%) of the electorate said that they would prefer Scotland to remain part of the United Kingdom, with 67% agreeing that the UK would be better off if Scotland remained. By contrast, a mere 15% believe that Scotland would be financially better off outside the UK. 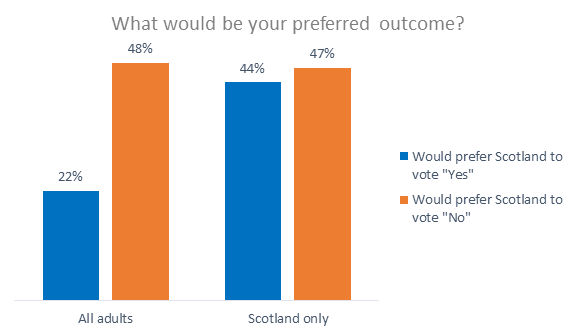 Full data and tables are available†here.