According to polling carried out for Carbon Brief, 89 per cent of respondents said they believe climate change is happening. Only six per cent said they did not believe the climate is changing.

But opinion was divided when it came to what’s causing climate change. The majority – 56 per cent – said humans are causing the warming, but a significant number – around 33 per cent – believe it’s mostly down to natural causes.

How significant is this? We found that despite the confusion about what’s causing global warming, 67 per cent of respondents want action to abate emissions now. That’s compared to 13 per cent who said we don’t need to worry about doing anything now and 12 per cent who said it would never be a problem. 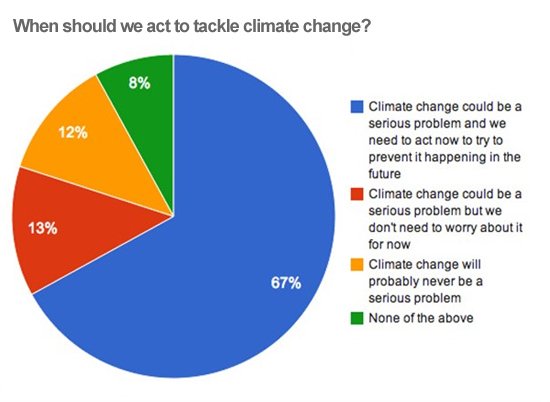 Carbon Brief also wanted to find out what people thought would happen to the weather in 10 years’ time as the climate warms.

Next highest came ‘green’ charities such as Greenpeace and Friends of the Earth, and BBC journalists and commentators, with 39 per cent and 31 per cent respectively saying they trusted these sources. But these groups divided opinion – 23 per cent don’t trust green charities, and 25 per cent think the BBC can’t be trusted to provide accurate information.

Opinium Research carried out an online survey of 2,017 UK adults aged 18+ from 29th to 31st of January 2013. Results have been weighted to nationally representative criteria.