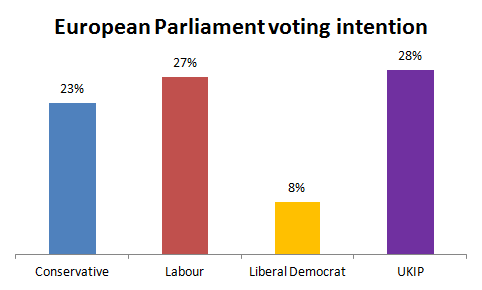 Changes refer to our previous unpublished poll (data tables available shortly) conducted between the 29th April and the 1st May.

A note on methodology:

In our Westminster voting intention polls we include anybody who says they are likely or certain to vote and selects a party. This reduces the number of people counted to around 65% of the total sample which is in the range of turnout in recent general elections. Turnout for European Elections is generally much lower (34% of GB voters in 2009, 38% in 2004) and the electorate is composed differently so our results take into account voting behaviour in previous elections when deciding who to count the final results.

Opinium Research carried out an online survey of 1,972 GB adults aged 18+ from 6th to 8th May 2014. Results have been weighted to nationally representative criteria and filtered to those likely or certain to vote, taking into account past voting behaviour in European Parliament elections.