Willing to risk it?

Willing to risk it?

Unbiased.co.uk, the professional adviser search, and Certainty.co.uk, the National Will Register today announced the launch of their joint ?Write and Register a Will Week?, beginning Monday 14 October. The research1 reveals a staggering 29.3 million of the UK adult population (58%) currently have no will and this figure has stayed the same from five years ago, standing at 57%2 in 2009.

The data shows that in fact the only age group that has taken action since 2009 are the 20-29 year olds, with the percentage falling from 88% to 83%, but still leaving a huge proportion without a will. 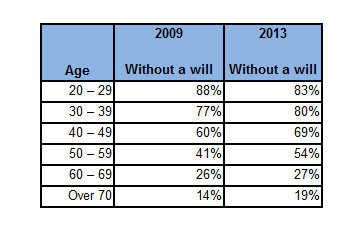 Who?s set to benefit?
Children and grandchildren continue to be the main beneficiaries, as one fifth (19%) of people said they are hoping to leave enough to boost their child?s or grandchild?s savings. The emphasis on providing financial security continues, as 24% of people said they would like to leave enough money for their family to live comfortably. Only 6% of respondents said they would like to leave a significant donation to a charity, falling from 8% last year.

No will, no way
However, without a will in place, these intended beneficiaries could receive nothing. Nearly one in ten (9%) of those without a will believe their estate will automatically go to the right people, but dying without a will means assets will be divided according to the rules of intestacy, potentially leaving unmarried partners or stepchildren financially vulnerable.

Procrastination still rules: a quarter (25%) of those without a will are putting off writing one ?until they are older?. More than one in ten (13%) admit getting a will has never even crossed their mind, implying that 87% have thought about it but simply done nothing. Cost continues to be a stumbling block for 11% of those without a will, who say they are putting it off because of the price of setting one up.

Regional differences:
Looking at the UK, the data shows the South West of England is the most prepared region, passing last year?s leader, the South East, but even so nearly half (48%) of those in the South West said they do not have a will in place. At the bottom, Northern Ireland (32%) and London (33%) reveal themselves to be the least prepared regions in the UK.

Karen Barrett, Chief Executive of unbiased.co.uk, comments: ?These statistics are as concerning now as they were in 2009. There are still a staggering amount of people without a will; in fact, this year?s data shows the number of 35-54 year olds without a will has risen from 64% to 68%, leaving them and their family in a vulnerable position.

?We are thrilled to be running the campaign jointly with Certainty.co.uk, the National Will Register, working to raise people?s awareness of the importance of writing a will and also ensuring it is registered. Too few people are aware of the security a will offers and too many believe it should be written when they are older. Writing a will is about protecting loved ones, making sure they receive exactly what is intended for them and ultimately achieving control over your finances, even when you are no longer around.?

Nigel McGinnity, Co-founder and CEO of Certainty.co.uk, comments: ?This year?s ?Write and Register a Will Week? brings further protection to you and your beneficiaries as we are providing free Will registration with Certainty the National Will Register. When considering writing your Will you also need to ensure that in the future the original copy can be quickly and easily located with minimal fuss for your family, when you have passed away.

?In a recent survey 67% of people were unaware of the location of the original copy of their parents? Wills. This is not surprising as a Will tends to be written, stored in a ?safe place?, and hopefully not needed for many decades.

?Not being able to locate a Will can lead to the estate being distributed under the laws of ‘intestacy’. This means that your estate may not be distributed in the way you had intended. Missing Wills and uncertainty as to whether a Will exists or not, can cause additional distress for family members, beneficiaries and executors.?

Putting a will in place can be done very simply with the help of a professional. Figures show the average cost of using a solicitor to draw up a will can be as low as £150 for singles and £200 for couples.3 This may not be an insignificant amount, but using a professional gives you peace of mind that the will is legal and valid, ensuring your wishes after your death are clear, and helping your loved ones deal with your estate at a difficult time.

A solicitor or financial adviser has the expertise and will be qualified to help you ensure your assets are being left to the right person, as well as interpreting the regulations and rules around inheritance tax.

Opinium research carried out an online poll of 2001 UK adults from 6th ? 9th September 2013. Results have been weighted to nationally representative criteria. UK Adult population 2013 is estimated at 50,371,000 (UK adults 18+ according to ONS population projection for 2013)

Opinium research carried out an online poll of 2005 UK adults from 25th ? 29th September 2009. Results have been weighted to nationally representative criteria.