No other policy received more pre-budget attention than the increase of the personal allowance. With debate other whether it is a Tory or Lib Dem policy some have argued instead for a rise in the 40% threshold to take more earners out of the top income tax bracket. 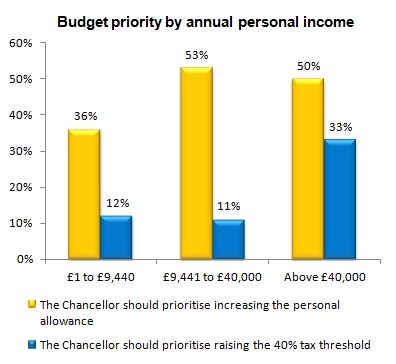 There are clear differences amongst income groups: only one in ten (11%) of those in the basic rate bracket thought raising the 40p threshold should be the Chancellor?s priority, compared to a third (33%) of those in the higher bracket. However, half (50%) of those earning more than £40,000 still thought the Chancellor should prioritise the personal allowance.

Opinium Research carried out an online survey of 2,001 UK adults aged 18+ from 18th to 21st March 2014. Results have been weighted to nationally representative criteria.