We know that he routinely gets far worse ratings than David Cameron (most recently 42% approve of the PM?s job performance vs. just 23% for the Labour leader) and Mr Cameron and George Osborne have a substantial lead over Ed Miliband and Ed Balls whenever we ask about trust on the economy. Yet Labour continues to lead in voting intention, albeit narrowly. So the question we?ve been faced with is how much of this has already been factored into Labour?s vote share?

More explicitly, will this be the first time in living memory that a party wins an election despite having a less popular leader and being less trusted to handle the economy or will we see a late fall in Labour?s lead as these fundamentals reassert themselves?

Sadly that?s something that we won?t know until either Labour?s vote share falls to the same as Mr Miliband?s approval rating or Labour win the election despite these impediments. In the meantime however, we can look at some possible indicators.
This week?s Opinium / Observer poll asked those who had chosen a party whether they were certain to vote for that party in May or whether there is a chance they could change their minds between now and the election. 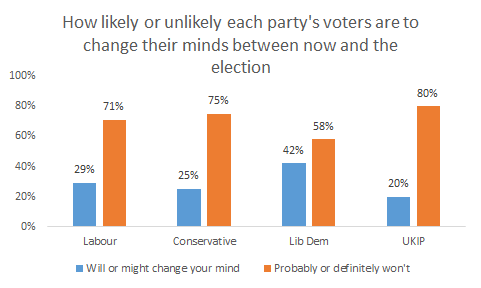 But if we look at whether these Labour voters approve or disapprove of Ed Miliband then things become a bit confusing. If Labour?s vote share was ?soft? because of Ed Miliband?s low ratings then we might expect Labour voters who disapprove of Mr Miliband to be more likely to say that they might change their mind before the election. Yet the actual figures are almost the opposite.

A quarter (26%) of Labour voters who disapprove of Mr Miliband say they might change their mind about who to vote for compared to a third (34%) of those who approve of him.

When Labour had a substantial polling lead, this was mainly due to the defection of so many 2010 Liberal Democrat voters and these voters tended to like Ed Miliband a bit more than 2010 Labour voters, as this piece from a year ago shows.

Now, however, with the Green party regularly jockeying for fourth place with the Liberal Democrats, these voters have another tempting offer that wasn?t available a year ago and that may be why they are more likely to consider jumping ship despite generally approving of the Labour leader. The Green party obviously doesn’t explain the general contraction in Labour’s lead over the last year but it might explain why some people you’d expect to be more loyal to a Miliband-led Labour party suddenly look a little flaky.

We?re still no closer to answering the Miliband conundrum but it looks like he needs to keep an eye on those Labour voters who say they support him as much as those who don?t.