Another 11 point lead for Labour on 42% ahead of 31% for the Conservatives with both main parties on the exact same share of the vote as they were in the last survey. The Lib Dems and UKIP have traded places again with 8% and 9% respectively, the mirror opposite of their figures in the last survey.

With the Lib Dems slipping a point, Labour’s lead over the total coalition share increases to 3 points from 2 points last time.

In the period since the last survey finished on June 11th we’ve seen celebrity tax scandals, Education Secretary Michael Gove’s plan to replace GCSE’s with O-Levels, David Cameron suggesting that under-25s on welfare should move back in with their parents and another government U-Turn on fuel duty. All of which seems to have had absolutely no effect on voting intention. 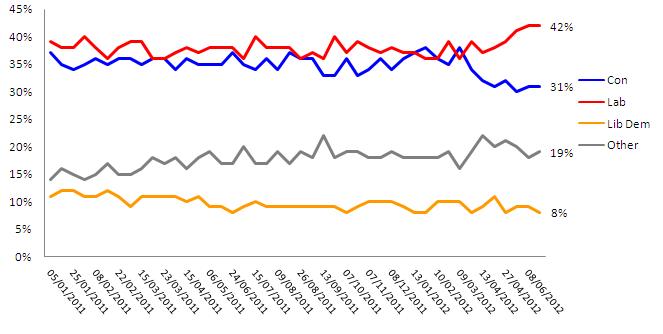 Opinium Research carried out an online survey of 1,959 GB adults aged 18+ from 26th to 28th June 2012. Results have been weighted to nationally representative criteria.