To infinity and beyond?

To infinity and beyond?

Two in five (39%) UK adults would gladly take the opportunity to fly to space on a commercial flight if given the chance while 35% would definitely keep their feet firmly on this planet.

With tickets on the first commercial flight into space selling at £125,000 a ticket, we asked those who would like to take a commercial flight into space how much they would be willing to pay. With 47% not prepared to spend more than £10,000 and only 15% willing to part with more than £50,000 it appears space travel may remain a distant dream for many for the time being.

Boldly going where no man has gone before

Making contact with extra terrestrials is considered an even longer shot with only 19% expecting ?first contact? in the next 50 years.

A galaxy far far away

6% of UK adults would send Celebrity Big Brother pair Speidi (Spencer and Heidi) into outer space if given the chance. 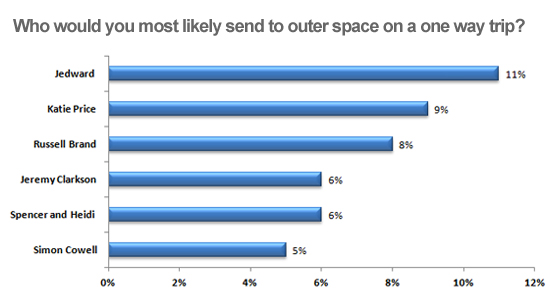