Our weekly poll showed a jump for the Tories, giving them their biggest lead and highest vote share since 2010. A YouGov poll carried out at the same time also showed the Tories jumping ahead to a two point lead before another one a day later reverted to a two point Labour lead. Over the weekend polls by Populus and Survation showed similar, even larger, Labour leads.

Attempting to make some sort of sense out of all this, it seems that if there was a post-budget bounce for George Osborne and the Tories then it was very short lived and quickly subsumed in the normal day-to-day of the campaign.

One thing that this highlights though is the importance for the Conservatives of keeping the discussion focused on the economy where they are strongest.

In this same poll 42% of voters say that they would trust David Cameron and George Osborne to handle the economy rather than anyone else, six points higher than the Conservatives? vote share in this same poll. A similar proportion (43%) say that George Osborne has been a good Chancellor overall. Back in 2012 just 11% had a favourable view of the Chancellor and while the two measures aren?t directly comparable (you can have an unfavourable view of someone but still think they are effective at their job) it gives an idea of how perceptions have shifted as the economy has improved.

So the Conservatives need the campaign to focus on the economy to the exclusion of all other issues as per Lynton Crosby?s ?barnacle clearing? strategy.

However, to draw your attention to a chart we produced a few weeks ago, the Conservatives? advantage on the economy is quite focused. Earlier this month we broke ?the economy? into a few different factors. ?Economy / economic situation? is quite general and can be seen as the management of the economy from the point of view of someone like the Chancellor. Economic growth would likely fall into this category. Others are more self-explanatory.

The Conservatives lead on handling the economy generally and this is as one would expect especially following a budget in which the Chancellor talks about the national economic situation.

The chart below is based on people who selected each category as one of the top three issues affecting them personally. Aside from ?economy / economic situation? which can be seen as affecting all of us, one would expect those selecting low-pay or poverty to swing left and swing left they do: 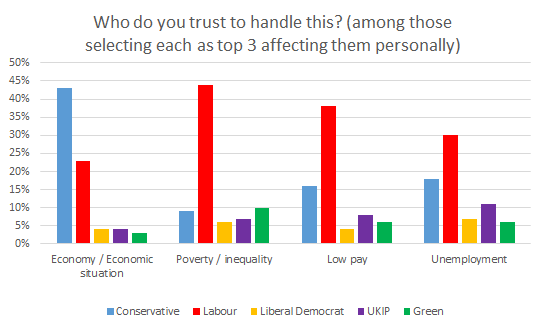 On these other aspects of the economy Labour have a big advantage. This may be among those who are personally affected by low pay and poverty but this advantage is likely to be reflected, if reduced, among the general population as well.

The Conservatives do well when the conversation is about the economy and they are far ahead on the subject of ?the economy? generally. They need to be careful when it becomes about specifics because here their advantage is less secure but, given that these other economic issues are generally more likely to affect people who support Labour anyway, it’s probably about as good as it’s going to get for George Osborne.