The issues that draw the political battlelines

When we asked voters what they thought were the most important issues facing Britain today, the top three answers were: Health / NHS (61%), race relations / immigration (48%), and the economy / economic situation (36%).

However, when we then asked them what they thought were the most important issues facing them and their family, the results changed:

Health remained the top issue, but immigration dropped noticeably down the list. Issues such as the economy and low pay moved up the list in on the other hand.

When those that said each issue was important to them and their family were asked which party they trusted most to handle the issue, the results provided an intriguing insight into the battlelines that are forming in the run up to the election. 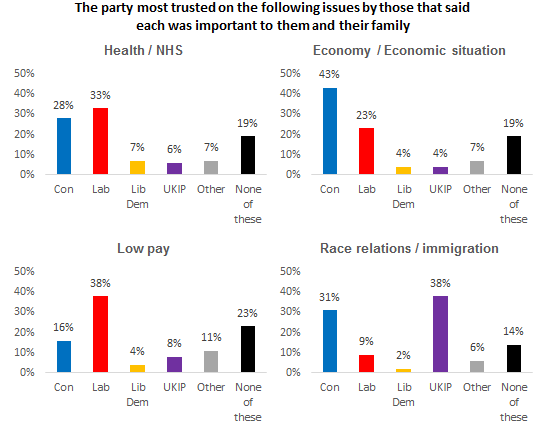 Although the NHS remains a key plank of Labour’s strategy, Labour’s lead on it is a relatively slim 5 points over the Conservatives, while the Tories take a 20-point lead as most trusted to handle the economy.