Even in the US the effect of debates between the two presidential candidates is generally to energise or demoralise your own side rather than convince undecided voters to support you.

Our poll finished fieldwork before the event so therefore would not have taken any of its effects into account but those polls that were conducted afterwards showed widely conflicting results.

Let?s start with the instant reaction poll by ICM. ICM very quickly polled 1,123 people who watched the debate and found that by 54% to 46% they thought that David Cameron had won. This was weighted to be representative of the whole country rather than just the audience of the programme and there?s a debate about whether that?s the best way to handle audience polls for political events but it?s the same as what we did for the Clegg-Farage debates last year.

So from ICM there was something for each major party to takeaway. The Tories could say that their man had won the first ?debate?, something incumbents usually lose in most countries where debates happen. Labour could say that 46% is far higher than the percentage who usually approve of Ed Miliband as Labour leader or say he would be a good prime minister and that those who changed their minds because of the programme generally moved in Labour?s direction.

On Saturday though, YouGov and the Sunday Times released their first full voting intention poll since the programme aired and gave Labour a four point lead (36% to 32%) with boosts for Ed Miliband?s leadership rating and a slight improvement in the ?best prime minister? question. That poll also found that the audience for the Battle for Number 10 contained more Labour voters than Conservative voters.

The news on Sunday was therefore full of talk about Labour momentum and how the reporting of the programme – where many commentators said Miliband may have lost but outperformed expectations – may have influenced perceptions of it.

Then on Sunday night the ComRes / Daily Mail / ITV poll showed exactly the opposite, the Conservatives ahead by 36% to 32%. 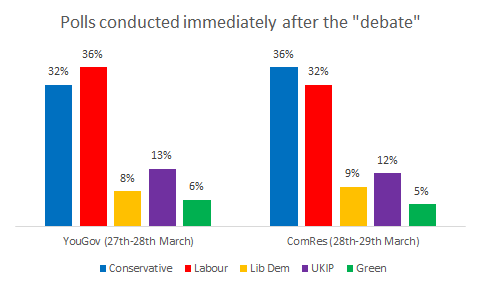 What impact there was from the programme is therefore still unclear and will only become clear in the polls published between now and the 7-way ITV debate this Thursday. We won?t know the new status quo until almost when it passes its sell-by date and is replaced by the new status quo following the next debate.

As well as voting intention though, the things to watch are any changes in the approval ratings for the party leaders among their own supporters. When Opinium publish our results we include this as a column on the right (example here).

It?s been the case for a long time that while Conservative voters are lock-step behind David Cameron (+87% net approval), Labour voters are considerably more wary about Ed Miliband (+53% net approval). The TV debates have long been seen as Ed Miliband?s only opportunity to overcome his poor ratings if Labour are to win the election but the way we?ll be able to judge his success will be if he?s able to rally his own side.