As Roy Hodgson?s team prepare for their opening match our first survey on the eve of the European Championships show strong support for Hodgson with a 44% net approval rating ahead of the first match against France (considerably higher than David Cameron?s score of -27% in our most recent government approval survey). Hodgson?s pick of Steven Gerrard as England captain appears to have gone down well with the fans as he enjoys a 51% approval rating for the job he’s doing as England captain.

Despite the strong support, optimism for England?s chances of lifting the Henri Delaunay trophy appears muted with only 8% of England fans predicting they?ll win the tournament overall, with half predicting a quarter finals exit and 18% not expecting England to make it through the group stages.

Robin Van Persie emerges as the favourite to pick up the Golden Boot award as picked by 21% of fans followed by Christiano Ronaldo (12%) and Fernando Torres (7%) with Cesc Fabregas, Mario Gomez and Wayne Rooney also being tipped as outsiders to win the award.

As for England?s opening game against France, fans appear fairly mixed about England?s chances of recording a win with 30% backing England to win, 36% think a draw is most likely and 34% believe England will come up short and France will win their opening match. 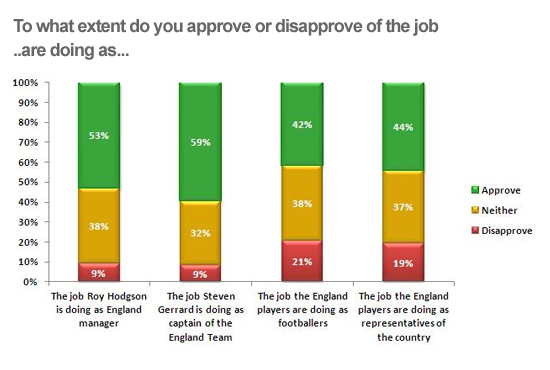 Opinium Research interviewed 1,117 England fans between the 7th and the 8th of June 2012.