Labour†take a 2-point lead in the polls

The Conservative vote share has dropped 2 points since last week, with the Liberal Democrats and UKIP vote share increasing

In the week of the Liberal Democrat Conference, Vince Cable?s disapproval ratings have increased, with a net approval of -16 compared to -11 last week. 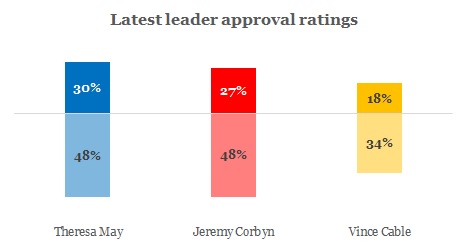 Theresa May?s lead over Jeremy Corbyn on who would make the best prime minister has remained fairly stable since last week, rising from 9 points to 10 points (currently it stands at 33% for May vs 23% for Jeremy Corbyn).

An overwhelming majority (84%) of the public think that there will be a leadership challenge in the Conservative Party in the event of a no deal, with 78% of Conservative voters also thinking this will be the case.