As the Scottish referendum draws closer, our poll of 1,055 eligible Scottish voters aged 16+ for the Observer shows that the unionist campaign have a six point lead of 53% to 47% once undecided voters are excluded. 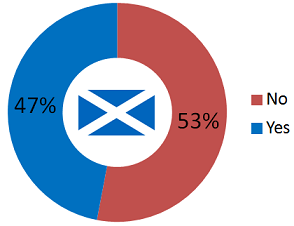 New powers proposed for the Scottish parliament have had little effect on voting intentions with 57% saying it has had no impact, including 46% of undecided voters. Furthermore, only 45% believe that the Westminster parliament will deliver on this promise while 47% believe they won’t.

Fears for either outcome

No voters are most concerned about the ability of a newly independent Scottish government to meet its financial commitments such as health or pensions (70% of No voters) as well as what currency Scotland would use (52%) and the possible effect on their living standards (40%).

Yes voters’ main concerns are to do with continued rule from Westminster (61%), followed by the UK parties not delivering on the promise of more devolution (55%) and Conservative politicians having too much influence over Scottish affairs (32%).

High marks for Salmond, less for his rivals

Alex Salmond receives high marks with 51% of Scots saying he has done well in the campaign. His deputy Nicola Sturgeon is close behind with 48% saying she has done well.

In contrast, Better Together leader Alistair Darling is seen by only 25% as having done well in the campaign with 24% saying the same for Gordon Brown, 13% for David Cameron and 10% for Ed Miliband.

Should Scots in England get a vote?

Respondents are divided on whether the 800,000 Scottish born people living elsewhere in the UK should have been allowed to vote in the referendum with 42% saying they should and 37% that they shouldn’t.

Opinium Research carried out an online survey of 1,055 Scottish adults aged 16+ from 9th to 11th September 2014. Results have been weighted to nationally representative demographic criteria as well as taking into account the results of recent elections in Scotland.