In last week’s Opinium†survey for the Polling Matters podcast, we looked at the impact perceptions of party leader Jeremy Corbyn are having on support for Labour.

In particular, we focused on†comparing those who would definitely vote Labour with those who would consider voting Labour but may not. A good way of differentiating between these groups is to remember that 84% of the former currently say they would vote for Jeremy Corbyn’s party compared to just 25% of the latter.

Compared to all other leaders, only Theresa May is clearly seen as the right person to lead her party at the next election with poor marks for Corbyn, Paul Nuttall of UKIP and Tim Farron of the Lib Dems: 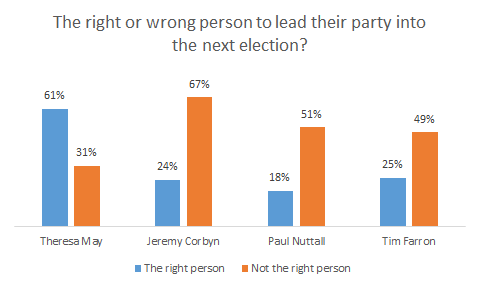 Here is how Jeremy Corbyn’s figures break out among those groups mentioned earlier: 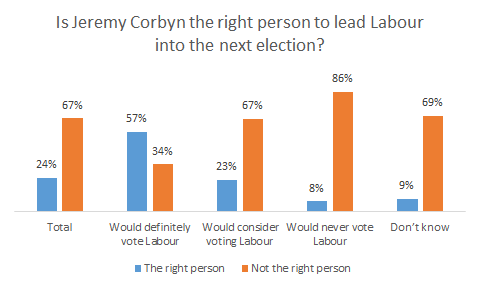 While†Labour can probably safely discount the third group (those who would never vote Labour) for now, the†sharply negative view of those who would consider voting Labour should concern the party. Even among those who say they would definitely vote Labour Mr Corbyn’s ratings are hardly emphatically positive.

The difficulty with asking questions about a change of leader is that respondents tend to assume that their ideal candidate will be the replacement rather than the flawed, compromise leader who†would actually be able to be elected. However, it is notable that among none of the groups mentioned†is the figure for “would make me less likely to vote Labour” higher than “would make me more likely to vote Labour”. Critically, the high figures for “more likely” in the “would consider” group suggest that the current leader is a significant barrier. 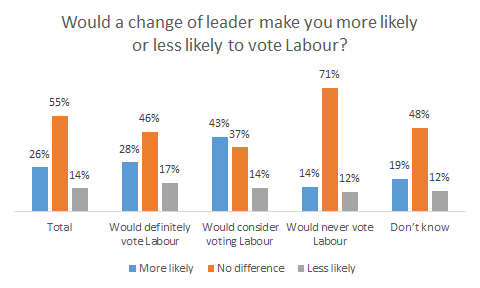 Whoever, if anyone, replaces Mr Corbyn will have their own flaws and controversies and perceptions of that leader would be determined by many factors that cannot be accounted for in hypothetical polls like this one. It is far from clear that a new leader would solve Labour’s serious longer term problems, but†these results suggest that voters†would like someone to try.