On your marks, set, Rio!

The eyes of the sporting world are about to turn to Rio for the second time in the two years following on from 2014 Football World Cup, as the Olympics hits Brazil on 5th August.

The 2012 games were an amazing success both for sport in general and for hosts team GB who will be hoping to match their exploits from 4 years ago. But it?s not just the athletes from around the world who have butterflies in their stomachs, the marketing executives from some of the biggest brands in the world will also be hoping that this games can be there games.Before the games our Brand league table shows Coca-Cola and Team GB kit sponsor Adidas leading the way in terms of association to the 2016 Olympics, with another one of the big guns McDonalds giving them a bit of head start. 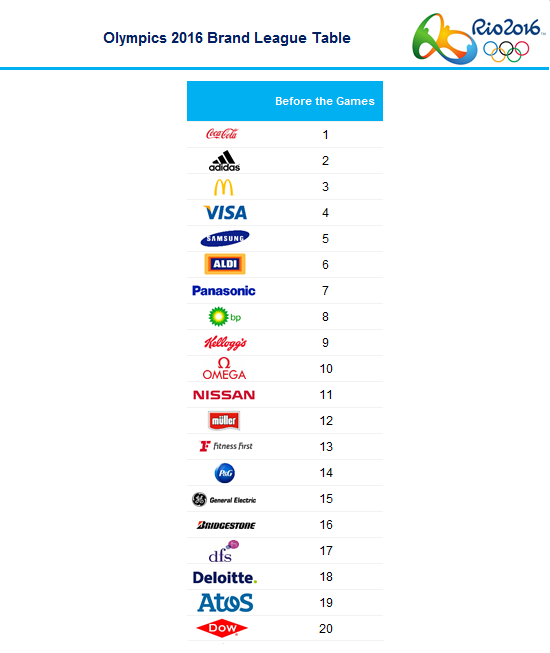 Beyond that there are a group of Team GB supports such as Kelloggs, Muller, and Aldi hoping that their connections fair somewhat better than those brands who backed England in the recent Euro?s.Over the course of the games we?ll be up dating our league table to see which brands can come out on top, there is the head to head battle between tech giants Samsung & Panasonic to look out for, and also find out who will be the surprise package, the brand that manages to capitalise on the exposure just like Hisense & Turkish Airlines did during Euro 2016.