Unlike the referendum question where the only answers are ?leave? and ?stay? (as well as ?don?t know? and ?prefer not to say?), the good thing / bad thing question has an explicitly neutral option which means that, while they traditionally tracked quite closely together, we now see the two questions diverge.

Here?s what the referendum tracker results look like for the last year and a half: 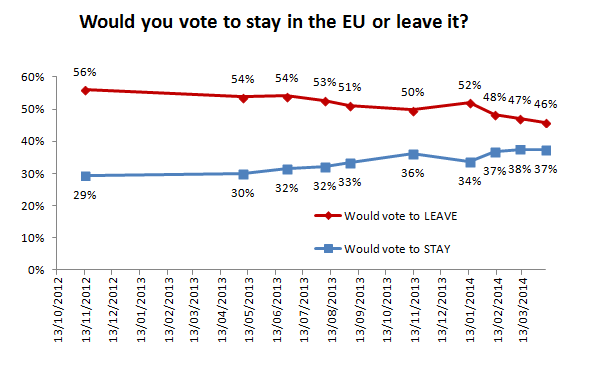 While the gap has clearly closed quite a bit since we first started tracking it, ?leave? is still several points ahead of ?stay?.

Here?s what the good thing / bad thing tracker results look like for the same period:

The same process of closing the gap has happened but ?good thing? has actually overtaken ?bad thing?. Looking at the actual percentages, ?good thing? and ?stay? tend to be within one or two points of each other in any given poll while ?leave? tends to be 8-10 points higher than ?bad thing?.

The reason for this is those who say EU membership is ?neither a good nor a bad thing?. If we look at how they would vote, they come down 38% to 27% in favour of leaving. However, as we can see from the chart below, neutrals are more likely to give less definite answers such as ?would probably vote to leave? or ?probably vote to stay? rather than the certainty that comes from those in the pro or anti camps.

One of the key conclusions of the in-depth European Union study we did last year (details here) is that, for many people, the decision to vote for Britain to leave the EU is a case of ?well since you ask…? rather than ?nothing else matters but this!?

Among those who say membership is neither good nor bad, the most popular individual option is to admit that you don?t know how you would vote but they are more likely to say ?no? than ?yes? and the fact that they go for the ?would probably…? rather than the ?would definitely…? options appears to back up our conclusion.