The story is that over the last six months David Cameron and George Osborne have steadily increased their lead while the proportion expressing confidence in Ed Miliband and Ed Balls has fallen.

Although we’d expect a government’s lead on economic issues to increase as the economy recovers, there are two interesting things about this:

The first is that the Conservatives’ increasing lead isn’t due to David Cameron and George Osborne increasing their ratings so much as it is due to Ed Miliband and Ed Balls decreasing theirs.

The second is that while Conservative voters are strongly supportive of their leaders (88% choosing Cameron and Osborne), Labour voters are far more hesitant to back theirs (53% choose Miliband and Balls, 24% said “none of these”).

The picture is similar with Ed Miliband’s approval ratings. Among Conservative voters, 87% approve of David Cameron’s performance while the figure for Ed Miliband among Labour voters is just 52%.

My initial assumption was that this is down to former Lib Dems making up such a high proportion of current Labour voters. Of the people who voted Lib Dem in 2010, between a third and half would currently vote Labour and in the poll mentioned above, ex-Lib Dems made up 15% of current Labour voters. Surely it makes sense that 2010 Labour voters, the loyal core in a terrible year for the party, would be more likely to support their leaders than ex-Lib Dems who defected in protest against the Coalition?

Yet the numbers don’t really bear this out. The table below is of current Labour voters, split by how they voted in 2010: 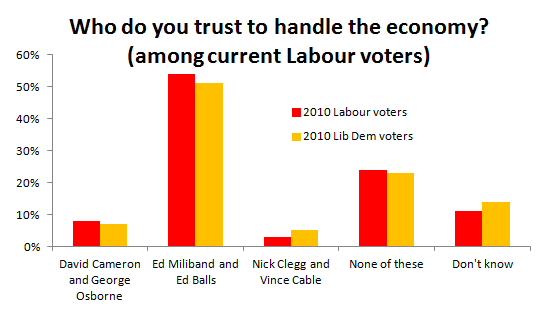 Aside from the “Nick Clegg and Vince Cable” and “don’t know” yellow columns being slightly higher than the red ones, there’s little evidence that the Labour economic team’s low ratings are down to 2010 Lib Dem voters not being completely on board with their current choice of party. Among 2010 Labour voters, there is still hardly the level of loyalty that 2010 Conservative voters have for their economic team (88% among 2010 Conservative voters who would vote that way today).

When we look to Ed Miliband’s approval ratings, the intake of ex-Lib Dem voters actually appear to have a higher opinion of the Labour leader than those who voted Labour in 2010:

So to answer the question in the title: No, Ed Miliband’s rating aren’t being dragged down by the fact that a significant proportion of Labour’s vote comes from former Liberal Democrats.

The fact that his ratings are equally low among pre-existing Labour voters speaks to a larger problem that the party’s leadership will have to address before 2015.