They have to be because the national share of the vote remains largely unchanged as it has done for the last few weeks. The two big parties are tied on 34% with UKIP in the mid-teens and the Greens and Liberal Democrats scrapping for fourth place.

George Osborne has an opportunity in the next few weeks to try to shake up that status quo but for this week we’ve decided to look at some of the other issues that might affect voters’ decisions. People are notoriously bad judges of what motivates them to vote the way that they do so with that caveat in mind, this week?s poll looked at what voters thought about the different issues facing the country.

However, ?race relations / immigration? is seen very much as a national-level issue rather than a local one. It?s the second most important national issue (48%) facing Britain but only 20% say it?s an important issue affecting themselves and their families. Similarly, ?defence / foreign affairs? is also a national issue, 14% say it?s a national issue vs. 7% an issue for them personally.

There are also interesting, if predictable, difference between supporters of each party. Asking at both levels also allows us to put together a bit of a pattern for each party?s support. Here?s a rather busy chart illustrating the ?national-level? question among voters for each party: 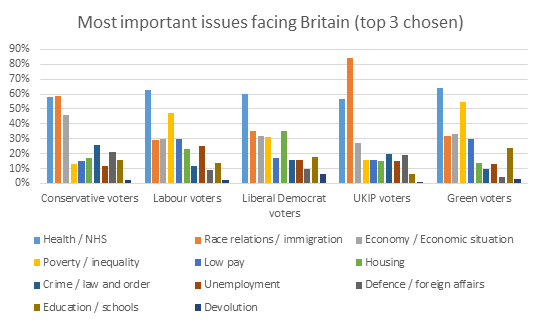 Immigration is important to most voter groups. Conservatives are more concerned than Labour or Lib Dem voters but look how high that orange column is for UKIP voters.

Here as well though we see this national-personal divide. Immigration is overwhelmingly the most important issue facing the country for UKIP voters but when it comes to the personal level it drops in half (42%) behind ?health / NHS? (56%) and barely ahead of ?economy / economic situation? (39%).

Here?s the same chart but for issues facing you and your family:

Another interesting point in light of the ongoing debate about defence cuts, it?s worth noting that the dark grey column on the right for ?defence / foreign affairs? is highest among Conservative voters.

The next and final overloaded chart we have is from the third question. For each issue we asked people who said it was one of the most important facing themselves and their family which party they trusted to handle it. This chart therefore is only among those saying the issue is one of the three most important to them:

Labour, predictably, leads on ?poverty / inequality? and ?low pay? while the Conservatives have big leads on ?crime / law and order? and ?defence / foreign affairs?. The two parties are almost at parity for ?education / schools? while UKIP leads on ?race relations / immigration?.

Among those for whom the NHS is a top-three concern Labour has what appears to be a surprisingly small lead of only 5 points (33% vs. 28% for the Conservatives). But this is because nearly half of those who are most concerned about the NHS are over the age of 55, a group that swings heavily Conservative.

The full data is available below and worth a look if you want to deep-dive.