Should governments be telling parents what to do?

In recent weeks a series of policies have been proposed regarding children and their parents which have sparked debate about how far the government should go in managing parents and their children.

Banning smoking in cars with children

The dangers of smoking and second-hand smoke been known for a long time now, which is why some have suggested the imposition of a ban on parents smoking in their car when their child is also inside.

A large majority (69%) clearly support such a ban. Support for it seems quite uniform, since it seems to be similar across age and region, although a slightly higher number of women than men support the ban (71% to 66%). 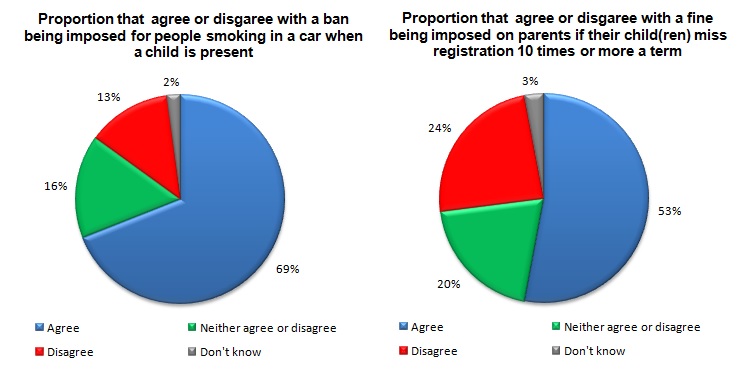 Fines for persistent lateness to school

Another proposal made was to reduce absenteeism amongst school pupils, whereby parents would be fined if their child missed registration 10 times during a term.

A majority (53%) agreed with this measure as well, although there was slightly more variation in support. For example, London was the region most supportive of this measure (60%), suggesting many can?t imagine a good reason for being regularly late in a city where the local school is often only a bus ride or a 15 minute walk away.

For policies like these, which are often fiercely debated, our research shows quite large sections of the adult population on one side of the argument.

Opinium Research carried out an online survey of 2,002 UK adults aged 18+ from 31st January to 4th Feburary 2014. Results have been weighted to nationally representative criteria.