The general trend has been the two parties being within one or two points of each other and, where one party has been more substantially ahead, these have been Labour leads. On the same day our poll was published a YouGov poll for the Sunday Times gave Labour a three point lead with figures for all other parties virtually identical to ours.

What does this mean? We?re probably still looking at a tie or, at most, a very slight Labour lead given the average of all the polls.

Labour may have benefitted from the campaign

Political scientists will tell you that election campaigns rarely have much of an impact on the final result except ?at the margins? but, in an election as close at this one, campaigns can matter a lot and there are two areas that appear to have benefitted Labour.

The first is that Ed Miliband has outperformed unreasonably low expectations. The chart below shows how people say their views of each leader have changed during the campaign itself: 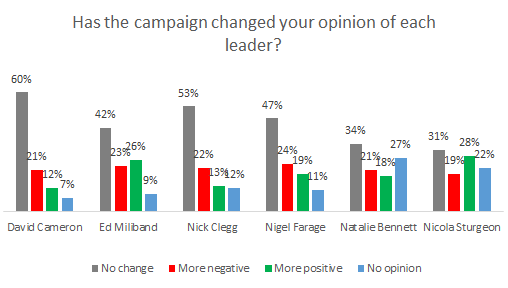 David Cameron and, to a lesser extent, Nick Clegg have been in the news fairly constantly for five years so it is not surprising that they have the highest ?views have not changed? figures. While it?s not as if Ed Miliband has been hiding in a cave during this time there has been a real change in the tenor of the coverage he receives. Instead of only cutting through when something embarrassing happens ? like his bacon sandwich incident or saying that he felt ?respect? when he saw a white van ? there has been more focus on the possibility of Miliband becoming Prime Minister by both the TV news and Labour supporting parts of the press.

The second area is that Labour may be doing better in the ?ground game? of volunteers knocking on doors and delivering leaflets, particularly in marginal constituencies. This is much harder to measure but where pollsters have asked about voters being contacted by either party Labour have tended to have the advantage.

Lord Ashcroft?s polling of marginal seat finds that more people report being contacted by Labour than the Conservatives and when we asked about this ourselves (across the whole of the UK) we found that Labour also had an advantage, albeit more narrowly (p53 here) on more in-person forms of contact such as canvassing. Before the campaign began much was made about how much better funded the Conservatives were but Labour have a slightly higher party membership and, crucially, those members tend to be a lot younger which may be more likely to make a difference in marginal seats.

Reasons for the Tories to be optimistic

The first is that if the polls do end up differently to the current average then there is reason to believe that it will be in the Tories direction rather than Labour?s.

Polling has changed and improved a great deal since the infamous 1992 election in which ?shy Tories? were reluctant to tell pollsters how they would vote but turned up to vote for John Major anyway. Polls before that election looked similar to how they do now with the Conservatives and Labour within the margin of error and Labour looking like the biggest party in a hung parliament yet the Conservatives won by seven points.

But apart from issues with methodology there was also a late swing to the Conservatives with some voters who said they planned to vote Labour switching at the last minute when the moment of decision came. The Conservatives have long hoped that something similar will take place in 2015 and it?s still perfectly possible regardless of what they are telling us now. Despite Ed Miliband?s progress in recent weeks voters still say David Cameron would be a better prime minister, still trust David Cameron and George Osborne on the economy far more than Ed Miliband and Ed Balls and also expect the Conservatives to win and David Cameron to remain in Downing Street.

On polling more generally, there are more examples of the Conservatives outperforming the polls? predictions than the other way around. In fact the only election in living memory in which Labour did better than the polls predicted was 2010 in which they appeared to be fighting the Liberal Democrats for second place but ended up beating them comfortably.

Ultimately the polls show Labour and the Conservatives are still within the margin of error of each other. Even the Tories? 4 point lead in our poll is on the margins of being statistically significant and there has yet to be any sort of a game-changer by either side. It is increasingly difficult to see how Britain can avoid a hung parliament in May at which point the question changes from ?who will win the election? to ?who can do a deal to get into Downing Street?.