Brits say being a celeb makes you a potential role model

Nearly two thirds (63%) of Brits think being a public figure automatically makes you a potential role model. The link is clear for many, with seven in ten (71%) thinking celebrities need to be more careful than others about the brands they promote or recommend while over half (55%) agree it is the duty of the rich and famous to use their influence for good. 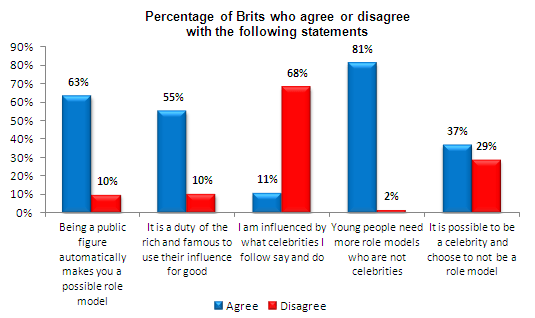 On the other hand, almost four in ten (37%) agree it is possible to be a celebrity and choose not to be a role model, as Scarlett Johansson has recently claimed. Many might think it would be a good thing if we broke the link, as four fifths (81%) agree that young people need more role models who are not celebrities.

When we asked who are the best celebrity role models that we have today, the top answers given were:

A fifth (19%) said they had a friend as a role model and 10% said other relatives, siblings and a teacher or lecturer were examples for them.

Opinium Research carried out two online surveys of 2,001 UK adults aged 18+. Results have been weighted to nationally representative criteria and the research was conducted between the 28th of February and the 31st of March 2014.

In compiling the list of celebrities that are good and bad role models, respondents were asked to select answers from a predefined list. That list was compiled using answers from an earlier survey in which a nationally representative sample were presented with an open text box and asked, unprompted, which celebrities they thought were good and bad role models.