Last year, Opinium Research polled the nation on their forecast for 2012 and can now confirm that Brits correctly predicted:

This year, the nation?s top five predictions for 2013 are:

Other predictions for the year ahead

Andy Murray?s gold medal-winning performance at the London 2012 Olympics seems to have stirred up national pride with 14% of Brits now prophesising that he will win 2013?s Wimbledon Championships. And following David Beckham?s announcement that he is leaving LA Galaxy football team, 15% of Britons also expect him and Victoria Beckham to return to the UK next year.

One issue of contention in the past year or two is Government health reforms and Opinium Research discovered that one in eight Brits (13%) foresee the NHS going on strike in 2013.

Interestingly, despite the current cold snap, one in 10 Britons (10%) also envisages a summer heat wave next year!

James Endersby, Managing Director of Opinium Research said: ?Judging by the correct predictions from last year, we have some mystic Brits in our midst who can tell the future! We can?t wait to see what the next year brings and whether the nation?s forecast for 2013 will ring true.? 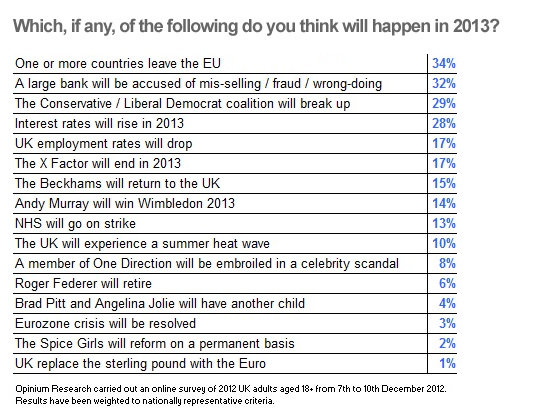 Opinium Research carried out an online survey of 2012 UK adults aged 18+ from 7th to 10th December 2012. Results have been weighted to nationally representative criteria.

The 2011 data has come from an online survey of 2010 UK adults aged 18+ Opinium Research that was carried out from 23rd to 28th December 2011. Results have been weighted to nationally representative criteria.