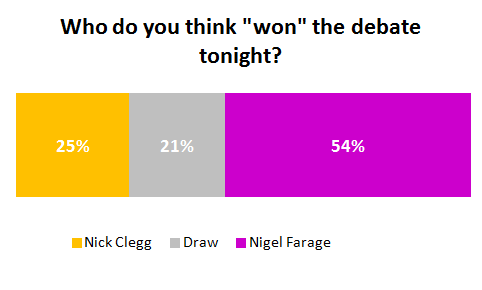 Farage was the clear winner among Conservative voters (56% vs. 28%) and Labour voters (43% vs. 34%). While each leader carried the voters of their own parties, the enthusiasm was with the UKIP leader; just 68% of Liberal Democrats said Clegg won vs. 95% of UKIP voters backing Mr Farage.

Did the debate change views on Europe?

However, when asked how they would vote in a referendum on Europe tomorrow, views were very similar to the last time Opinium asked this question in mid March. 50% would vote to leave the European Union while 39% would vote to stay while the figures from the March poll are 47% voting to leave and 38% voting to stay. These figures aren’t directly comparable as the sample definition and weighting are slightly different but they do appear similar.

Looking at debates in the future, 87% of our sample said that there should be party leader debates before the 2015 general election, as there were in 2010, and Mr Farage looks to have booked himself a podium. We asked which party leaders should take part in debates in 2015 and the results are below:

However, there was some support for a German-style two-tiered debate where the two main candidates for prime minister (likely David Cameron and Ed Miliband) square off in a debate without any other leaders while the leaders of smaller parties such as the Liberal Democrats and UKIP have a separate debate. 47% supported this arrangement while 28% opposed it although the real choice of course depends on what the party leaders and the television channels are able to negotiate.

If forced to choose

The main bit of good news for Nick Clegg is that when respondents were asked who they preferred for prime minister, Mr Clegg or Mr Farage, with no other options (or “don’t know” or “none” options) given the result is much closer with 48% for Mr Clegg vs. 52% for Mr Farage.

Opinium Research carried out an online survey of 1,041 UK adults aged 18+ from 2nd to 3rd April 2014. Opinium screened our nationally representative panel of respondents and those who opted in were asked to watch the debate and answer a short survey upon completion. Results have been weighted to be representative of the total UK adult population according to age group, gender, region and voting intention to match Opinium?s most recently published political polling.