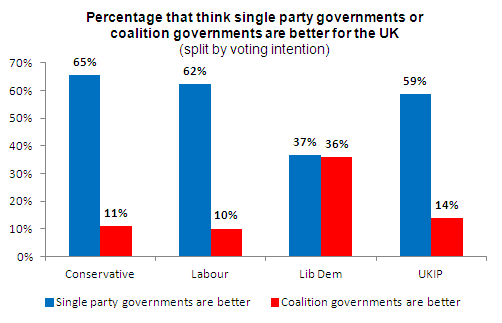 Unsurprisingly, just over a third (36%) of Liberal Democrat voters thought that coalitions were better. However, for a party that has consistently been a champion of proportional representation for decades, it may appear odd that a similar number (37%) actually thought single party governments were best for Britain.

After the next election

If 2015 did indeed produce a hung parliament, 36% thought that a coalition should be formed. However, more supported an option to try and avoid a coalition ? a fifth (18%) thought the largest party should form a minority government, while 30% thought another general election should be held.

Opinium Research carried out an online survey of 1,683 likely GB voters aged 18+ from 6th to 8th May 2014. Results have been weighted to nationally representative criteria.